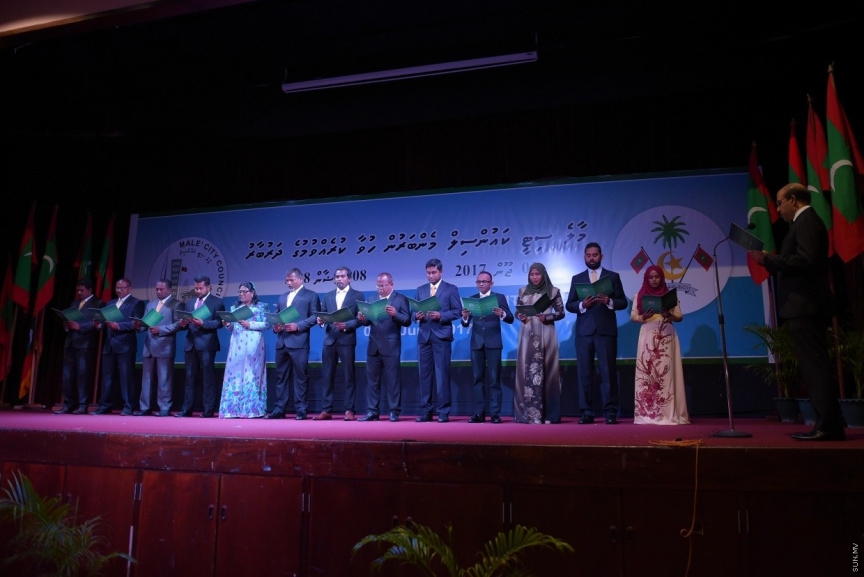 Male' City Councilors being sworn in to their posts. (Sun Photo/Mohamed Afrah)

Male’ City Councilors have stated that Speaker of the Parliament Mohamed did not threaten them in any way during a meeting in regards to a vote of no confidence in Male’ City Mayor Shifa Mohamed.

The vote of no confidence in Mayor Shifa was to be held today before the Local Government Authority stated that the vote cannot be held.

A signed statement by Councilors Ahmed Zameer, Hamna Waheed, Ahmed Niyaaz, and Hussain Shareef read that the news articles about Speaker Nasheed allegedly threatening them were baseless and without any merit.

As the party leader, Nasheed met with the Councilors and discussed future projects and work, read the statement.

“It an act of cowardice to obtain political benefits that misleading statements regarding the meeting are being spread.” Read the statement by the Councilors.

A member of the Male' City Council who wished to remain anonymous, speaking with Sun had stated Nasheed had threatened repercussions against Councilors if the vote of no confidence was pursued.

The vote was to be held today at 15:00, and the Councilor said that the Nasheed’s statements indicating possible repercussions such as expulsion from the party had made Councilors hesitant in pursuing the vote.

A letter signed by the CEO of the LGA Afshan Latheef addressed to Mayor Shifa today read that an emergency meeting of the LGA today had decided that the vote of no confidence in Mayor Shifa by one Councilor could not be pursued and that the LGA was conducting a formal inquiry into the matter.

Councilor for North Maafannu Mohamed Fazeen submitted the vote of no confidence against Mayor Shifa. They include 39 issues against Shifa such as violations of financial regulations, disregarding the decisions of council committees, and pursuing her own decisions.

Mayor Shifa was granted ten days to respond to the allegations presented on August 18. Eight members of the Male' City Council voted for the no-confidence motion against Shifa. Deputy Mayor Shamau Shareef is among the two that voted against the motion.

No decision on issuing Eman’s allowance to family yet