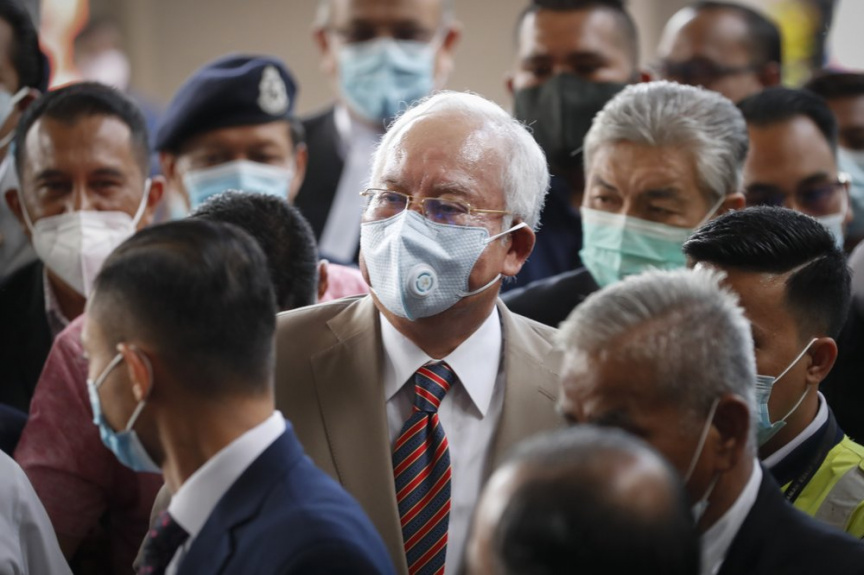 The ruling came five months after a new government took power with Najib’s Malay party the biggest bloc in the alliance. His party’s shocking election ouster in 2018 was driven by public anger over the 1MDB scandal.

“I find the accused guilty and convict the accused of all seven charges,” Judge Mohamad Nazlan Ghazali said after spending two hours to read out his ruling.

Najib has promised to appeal. He has said he was misled by rogue bankers and the case against him is political.

Analysts said the ruling would bolster the prosecution’s case in Najib’s other trials. He faces 42 charges in five separate trials and could face years in prison.

THIS IS A BREAKING NEWS UPDATE. The AP’s earlier story is below:

Ex-Malaysian Prime Minister Najib Razak arrived at court Tuesday for a verdict in the first of several corruption trials linked to the multibillion-dollar looting of the 1MDB state investment fund.

The outcome is widely seen as a test of the rule of law five months after a new government took power. Najib’s Malay party returned to office as a key player in the new ruling alliance, less than two years after its shocking ouster in 2018 elections driven by public anger over the 1MDB scandal.

Security was tight at the courthouse, with the public barred from entering and staff spraying hand sanitizer for media outside. As Najib, wearing a mask and beige suit, entered the building a crowd of supporters gathered outside, some wearing shirts reading “bossku,” or “my boss.”

Najib, 67, said in a Facebook post late Monday that he was prepared to fight to the end. He said he would appeal if he was found guilty, and expects prosecutors to appeal if he was acquitted.

“From day one, I have said this is the chance for me to clear my name,” he wrote. “Whatever the decision in the High Court tomorrow, it does not end here ... after this, we will go to the Court of Appeal. I am ready.”

Najib faces a total of 42 charges in five separate graft trials linked to the 1MDB saga and may be sentenced to years in prison if convicted in the first trial alone.

Analysts said the ruling could affect Najib’s other trials and send a signal to the business community about the strength of Malaysia’s legal system in tackling international financial crime.

The verdict will also test current Prime Minister Muhyiddin Yassin, who was fired as Najib’s deputy in 2016 for speaking out on the 1MDB scandal but now relies on Najib’s party for support. Najib’s party is the biggest bloc in the current Malay nationalist alliance, which was formed in March after a political coup by Muhyiddin’s party toppled the former reformist government.

But the fund accumulated billions in debt, and U.S. investigators allege that at least $4.5 billion was stolen from it and laundered by Najib’s associates to finance Hollywood films and buy hotels, a luxury yacht, artwork, jewelry and other extravagances. More than $700 million from the fund allegedly landed in Najib’s bank accounts.

Najib’s wife and several officials from his party and previous government have also been charged with graft. Najib, whose father and uncle were Malaysia’s second and third prime ministers, denies any wrongdoing. He calls the prosecutions a political attack on him.

Najib’s first trial began in April 2019 over seven charges related to the transfer of 42 million ringgit ($9.8 million) from SRC International, a former 1MDB unit, into his bank accounts through intermediary companies. Najib is accused of using his position to receive a bribe for approving a government guarantee for billions in loans to SRC, committing criminal breach of trust and accepting proceeds from unlawful activities.

Evidence showed a complex trail of money through the accounts that paid for renovating Najib’s home, credit card purchases including a Chanel watch bought in Hawaii as a birthday gift for his wife, and disbursements to political parties.

Najib has said he was misled by rogue bankers led by Malaysian fugitive financier Low Taek Jho, identified by investigators as a mastermind in the looting of 1MDB. Najib testified he assumed the money was part of an Arab donation arranged by Low.

Najib’s lawyers said Low used the donation as a guise to keep Najib from being suspicious of his plundering of the 1MDB fund. Prosecutors argued Najib was the real power behind 1MDB and SRC, and called the Arab donation “manufactured evidence” to cover up his tracks.

Whatever the verdict, both sides can appeal the decision in a lengthy process.