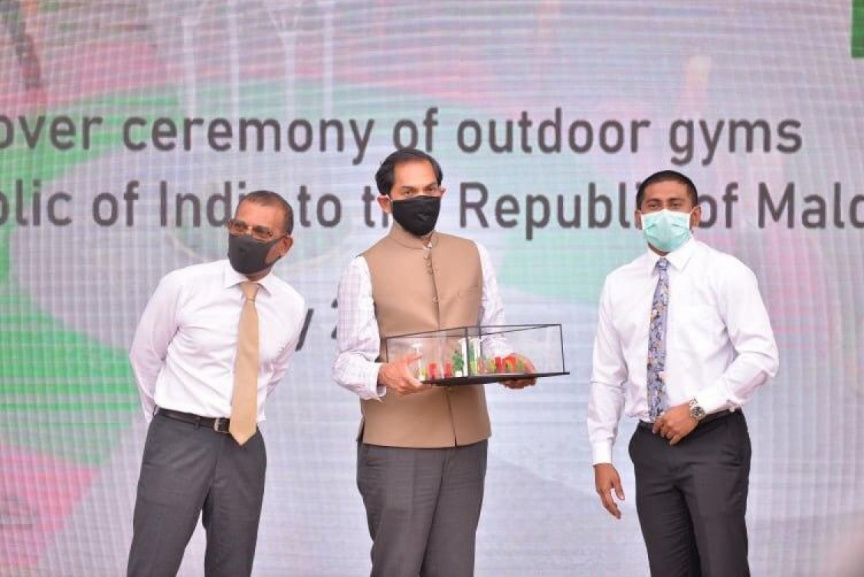 Fitness equipment procured with grant assistance from India to build outdoor gyms in 61 islands has been officially handed over to the Maldives.

The outdoor fitness equipment were handed over on behalf of the Indian government by High Commissioner Sunjay Sudhir in a ceremony held at the national football stadium in Male’ on Monday evening.

The project to build outdoor gyms in 61 islands is funded under grant assistance provided by the Indian government for socioeconomic projects in Maldives in March 2019.

The project is expected to contribute to the Maldivian government’s ‘healthy lifestyles’ policy through easier access to fitness equipment.

The Sports Ministry signed a MVR 8 million agreement with Sports Corporation to procure fitness equipment for the outdoor gyms in the 61 islands on September 3, 2019.

Foreign Ministry stated at the time that the total value of the project is estimated at MVR 20 million - which will be fully funded by India.

Speaking at the ceremony, Foreign Minister Shahid said the project underscores Maldivian President Ibrahim Mohamed Solih’s commitment to build a healthy nation, and the commitment of the Indian government in supporting socioeconomic projects in Maldives.

“My hope is the gym equipment presented today are installed at 61 islands, and the Maldivian people have access to it as soon as possible,” said Shahid.

He added that the project has the potential to revitalize the strong bonds of community and kinship amongst the island communities, whilst maintaining a healthy day-to-day routine.

Indian High Commissioner Sudhir said the project was discussed during Indian Prime Minister Narendra Modi’s visit to Maldives in 2018, and that Modi, during his visit, had also decided to grant funding for large USD 80 million projects and smaller MVR 8 million projects in Maldives.

Sports Minister Mahloof said the project has served to reinforce the close relations between Maldives and India, and thanked the Indian government for its contribution towards the development of sports in Maldives.

Speaker Nasheed, who served as chief guest of the ceremony, highlighted on the age-old close relations between Maldives and India. He said that the Maldivian people would have a difficult time without the strong Maldives-India relations.