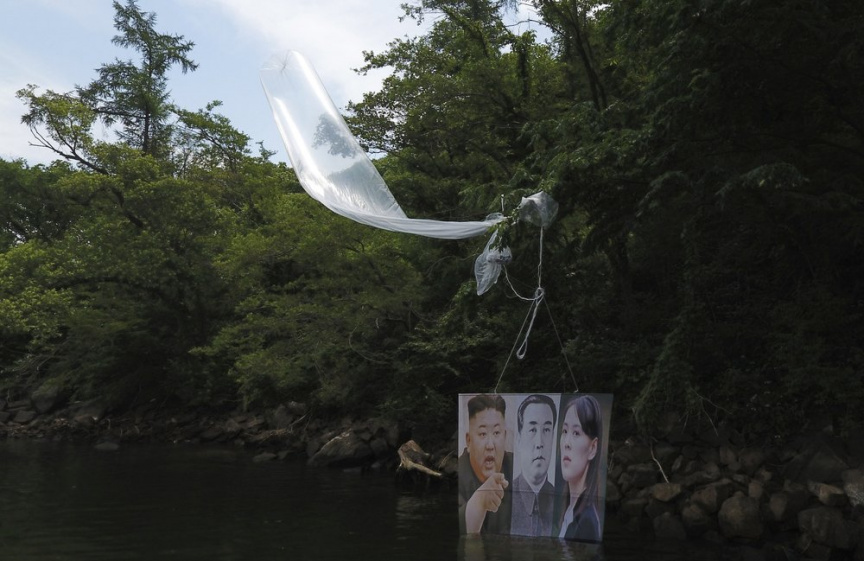 SEOUL, South Korea (AP) — A South Korean group launched hundreds of thousands of leaflets by balloon across the border with North Korea overnight, an activist said Tuesday, after the North repeatedly warned it would retaliate against such actions.

The move is certain to intensify already high tensions between the Koreas. North Korea recently abruptly raised its fiery rhetoric against South Korean civilian leafleting, destroyed a Seoul-built liaison office on its territory and pushed to resume its psychological warfare against the South.

Local officials in South Korea were looking into the account and may ask police to investigate it as a potential safety threat to front-line residents.

Park, formerly a North Korean who fled to South Korea, said in a statement his leafleting is “a struggle for justice for the sake of liberation of” North Koreans.

Calling North Korean leader Kim Jong Un “an evil” and his rule “barbarism,” Park said he’ll keep sending anti-Kim leaflets. “Though North Korean residents have become modern-day slaves with no basic rights, don’t they have the rights to know the truth?” he said.

South Korean officials have vowed to ban leafleting and said they would press charges against Park and others, who have sent leaflets toward North Korea for years. Park accused South Korea’s liberal government of sympathizing with North Korea or caving to its threats. Park’s brother, another activist also formerly from North Korea, last week canceled plans to release bottles filled with dried rice and coronavirus masks from a front-line island.

Gyeonggi province, which governs Paju, has issued an administrative order prohibiting anti-Pyongyang activists from entering certain border areas including Paju to fly leaflets to the North. If Park’s leafleting is confirmed, Gyeonggi official Kim Min-yeong said the province will demand police investigate him. The penalty for violations is a year in prison or a maximum 10 million won ($8,200) fine.

North Korea does not tolerate outside criticism of its ruling family, who enjoy a strong personality cult built by North Korea founder Kim Il Sung, whose military’s surprise invasion on South Korea triggered a devastating three-year war in June 1950.

Park previously said he would push to drop a million leaflets over the border around Thursday, the 70th anniversary of the start of the Korean War. A large banner that Park said was flown to North Korea with the leaflets Monday shows the image of Kim Il Sung and calls him “the slaughter of (the Korean) people” and urged North Koreans to rise up against the Kim family’s rule, according to photos distributed by Park.

In recent weeks, North Korea has unleashed crude insults against leafleting activists like Park, describing them as “human scum” and “mongrel dogs.” It said it would also take a series of steps to nullify 2018 tension-reduction deals with South Korea. On Monday, North Korea’s state media said it had manufactured 12 million propaganda leaflets to be floated toward South Korea in what it said would be the largest-ever anti-Seoul leafleting campaign

Experts say North Korea is likely using the South Korean civilian leafleting as a chance to boost its internal unity and apply more pressures on Seoul and Washington amid stalled nuclear diplomacy.