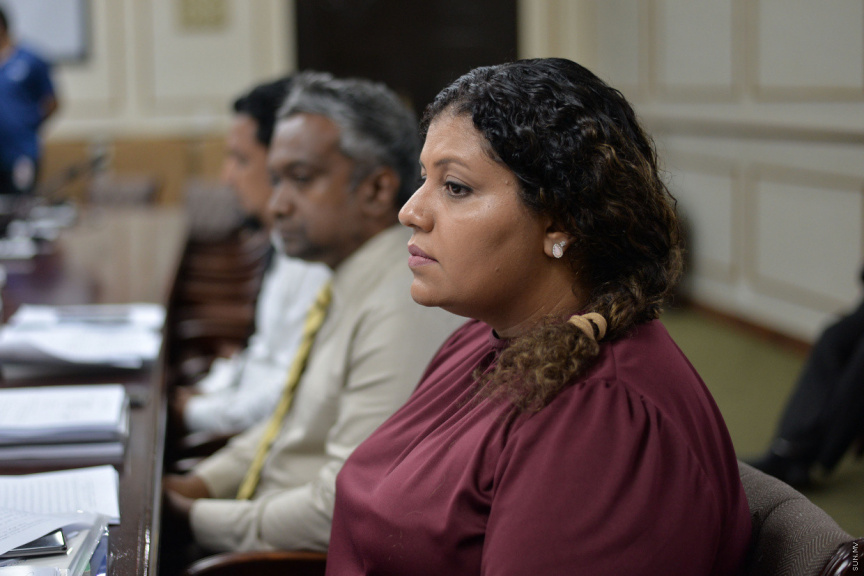 Hinnavaru MP Jeehan Mahmood, on Saturday, gave up the land awarded to her from L. Gan following accusations she secured the land through corruption.

The issue came to light after the L. Gan Council released the list of applicants awarded land from the island. It shows Jeehan was awarded 10 points as a resident of Gan, despite the fact that she resides in Male’ City.

L. Gan Council has released a list of 400 people chosen to be awarded land from the island, and a reserve list of 49.

Jeehan told Sun on Saturday that she applied for land from Gan for her children.

“I don’t have private property either in Male’ or in my home island Lh. Hinnavaru. Only a few islands open application for land to non-residents. And as it happened, the opportunity presented itself from the island of my husband and children. And that is why I submitted by application,” she said.

Jeehan receives 71 points. She will be left with 61 points after deducting the 10 points awarded to Gan residents.

Jeehan said that she had been sure to she would receive enough points to qualify, even when she submitted her application. She has been sure she would receive points for being married, having children, having completed higher education, and lacking any private property anywhere in Maldives.

She said she therefore did not have any reason to attempt to secure additional points she did not deserve.

The person on the bottom of the 400-people list released by Gan Council had scored 67 points. This means Jeehan, who if fairly vetted will receive 61 marks, will not make it on the list.

“I have no idea how I was awarded points as a resident of Gan.  I’m not the one awarding points. I don’t know how the points were awarded,” she said.

Jeehan said that she had forgotten she had even applied for land from Gan, and learnt she had been awarded land through the press.

“What I believe is, if even a droplet of doubt forms over a process, the process is null and void. I have worked for everything I have. I have not even bought a can of condensed milk for my home through illicit means,” said Jeehan.

Jeehan said she had not misused her influence to secure land, and said that she never had and never would resort to corruption.

She said that she did not want to spend her whole life in Male’, and had always planned to resettle in Hinnavaru or Gan when she reached her 50s.

“But I think I should pursue this after I complete my term [at the Parliament]. Something better is ahead, In Sha Allah,” she said.