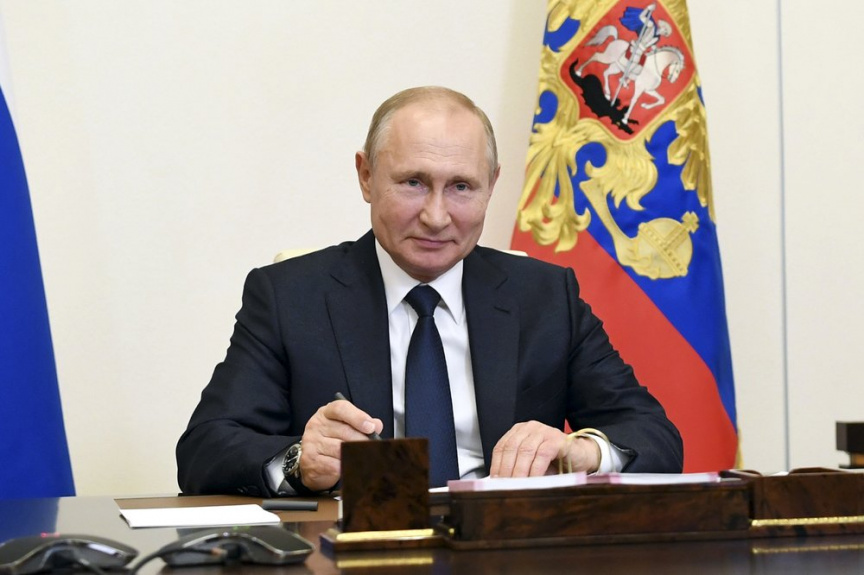 MOSCOW (AP) — Russian President Vladimir Putin on Monday set a July 1 date for a nationwide vote on constitutional amendments allowing him to extend his rule until 2036, even as the nation is continuing to record high numbers of new coronavirus cases.

Speaking during a live video call with top officials, Putin insisted that the pace of the outbreak has slowed down, allowing the nation to safely hold the vote. If approved, the constitutional amendments would allow Putin to spend another 12 years in power after his current term ends in 2024.

The Russian leader argued that Russia will have 30 days before the vote to take additional efforts to control contagion and make the ballot fully safe. The vote was postponed from April 22 due to the pandemic.

“We have fulfilled the main task — to prevent the explosive negative development of the situation,” Putin said. “It allows us to return to normal life as the situation is gradually stabilizing.”

Officials reported to Putin that voters will have a chance to cast ballots in the six days before July 1 to reduce crowds and increase safety amid the pandemic. They said they would distribute free masks, gloves and pens at polling stations, adding that voting would be held outdoors in many areas to make it even safer.

While the spread of the outbreak has slowed down, Russia has the world’s third-largest caseload, with nearly 415,000 infections. It is also continuing to record a steady increase in the number of new cases, with more than 9,000 new cases reported over the last 24 hours.

Russia’s relatively low coronavirus death toll of 4,855 has caused suspicions among some Russian and Western experts that the authorities may have under-reported deaths to cast a positive picture for political reasons, but officials angrily denied manipulation, saying that low mortality has been the result of efficient preventative measures and broad testing.

Some of Russia’s 85 regions already have eased the lockdown imposed in late March, but many others, including Moscow, have kept restrictions in places. Moscow, which accounted for about half of the nation’s caseload, let all non-food retailers, dry cleaners and repair shops reopen Monday and allowed residents to take walks, but kept many other businesses shut and maintained mandatory electronic permits for travel.

Citing a slowdown in contagion, Putin last week ordered the Victory Day parade marking the 75th anniversary of the Nazi defeat in World War II to be held on June 24. The massive parade that was postponed from May 9 is intended to underline the nation’s decisive role in the war and reflect its increased international clout.

The constitutional vote has been the focal point on Putin’s political agenda since he initiated the changes in January.

Under the current law, Putin wouldn’t be able to run for president again in 2024 because of term limits. A new measure would reset his term count, allowing him to run for two more six-year terms if he chooses.

The 67-year-old Putin has been in power since 2000, longer than any other ruler in the country since Soviet dictator Josef Stalin.

Other constitutional changes further strengthen the presidency and emphasize the priority of Russian law over international norms — a provision reflecting the Kremlin’s irritation with the European Court of Human Rights and other international bodies that have often issued verdicts against Russia.

”I strongly hope that citizens of Russia will take an active part in determining the parameters of the main law,” he said.

The Kremlin-controlled parliament quickly rubber-stamped the amendments in March. It was Putin himself who early in the year proposed its endorsement by popular vote, even though it wasn’t required by law, in an apparent bid to bolster his legitimacy.

When the pandemic struck, it put the Russian leader in a precarious position. Calling off the vote would have been an impermissible show of weakness, holding it as planned was too risky amid the spreading contagion and pushing the ballot until the fall could yield unpredictable results.

A partial economic shutdown that Putin ordered in late March badly hurt an economy already battered by a sharp drop in oil prices, fomenting social discontent. Putin’s approval ratings sank to 59% in April, the lowest in the two decades he has been in power, according to the Levada Center, the nation’s top independent pollster.

Russia meets UEFA for path back into world sports

Europe reopens borders but not to Americans, Asians