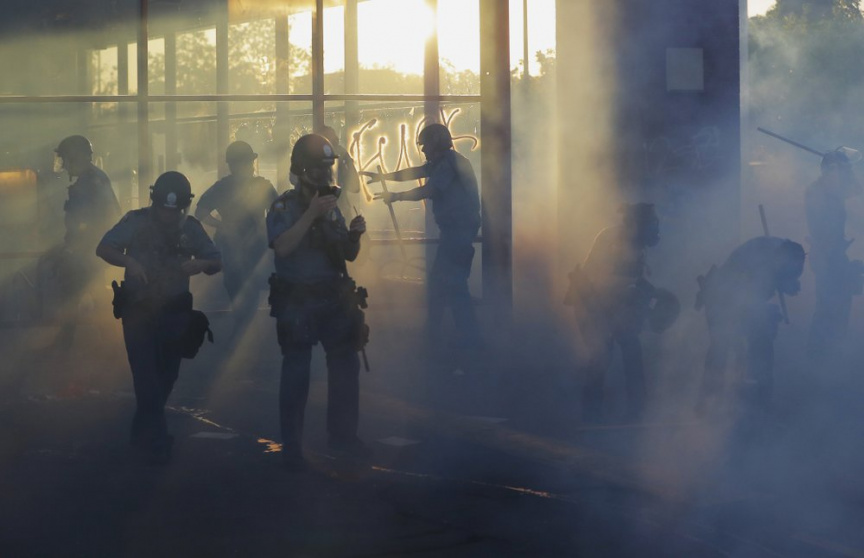 Police move through an area during demonstrations Thursday, May 28, 2020, in St. Paul, Minn. (AP Photo/Julio Cortez)

NEW YORK (AP) — Following the arrest of a CNN crew on live television by police on Friday, an apologetic Minnesota Gov. Tim Walz promised that journalists would not be interfered with in reporting on violent protests following the death of George Floyd.

CNN correspondent Omar Jimenez and two colleagues were released within an hour after network chief executive Jeff Zucker called Walz to demand answers about why they were led away and held in a police van.

“We have got to ensure that there is a safe spot for journalism to tell this story,” Walz said.

Jimenez and colleagues Bill Kirkos and Leonel Mendez were doing a live shot for CNN’s “New Day” shortly after 5 a.m. Central Time, describing a night of fire and anger in the wake of Floyd’s death after a Minneapolis police office knelt on his neck. Fired officer Derek Chauvin

When first approached by officers, Jimenez, who is black, told them, “put us back where you want us. We are getting out of your way.”

The Minnesota State Patrol said on Twitter that the journalists were among four people arrested as troopers were “clearing the streets and restoring order” following the protests. The patrol said the CNN journalists “were released once they were confirmed to be members of the media.”

It’s not clear why they were confused: Jimenez was holding what appeared to be a laminated ID card before his hands were secured, and his fellow crew members told police that they were from CNN and showing the scene live on the air.

After being released, Jimenez said that he was glad that his arrest was shown on the air.

“You don’t have to doubt my story,” he said. “It’s not filtered in any way. You saw it for your own eyes. That gave me a little bit of comfort. But it was definitely nerve-wracking.”

At a later news conference, Walz said that “I take full responsibility. There is absolutely no reason something like that should happen ... This is a very public apology to that team.”

The arrest drew widespread condemnation across the news industry. CNN competitors MSNBC, CBS News and Fox News all issued statements in support of Jimenez, along with the Society of Professional Journalists and the National Association of Black Journalists.

CNN accepted Walz’s apology, saying the network appreciated the sincerity of his words.

Walz’s words in support of journalists have impact at a time when the news media is often under attack, said Jane E. Kirtley, Silha Professor of Media Ethics and Law and director of the Silha Center at the University of Minnesota.

“It’s really important for the governor to make that kind of statement to emphasize to everyone, especially law enforcement, that the press has an important job to do ... and they need to be respected,” said Kirtley, who lives blocks away from the protests and could still smell smoke from the fires on Friday.

Later Friday, the network was again thrust into the story when . Activists spray-painted a large CNN logo outside the building, breaking a window and tagging doors. One protester climbed on top of the CNN sign and waved a “Black Lives Matter” flag to cheers from the crowd.

As anchor Chris Cuomo opened his prime-time show, he told viewers the network’s headquarters had been “swarmed and defaced.” Footage of the damage outside was mixed with scenes from other protests around the country.

“This is our home, Chris, you know, this is where we come to work every day, journalists who are trying to tell the truth, trying to deliver information. ... And these demonstrators have decided to come here today to take our their frustration and anger it seems not just on police but on our CNN center as well,” Valencia said.

Meanwhile, there were signs Friday that cable news networks, who were spending much of their time covering the story, have become sensitive to the impact of showing witness video of Floyd’s treatment by police.

News anchors on all three networks usually warned viewers of its graphic nature before showing the video.

“I must warn you that this is difficult to watch,” said CNN’s Brianna Keilar, “but it is important to remember.”

No evidence parade-crash suspect knew anyone on route

About 80 thieves ransack US department store