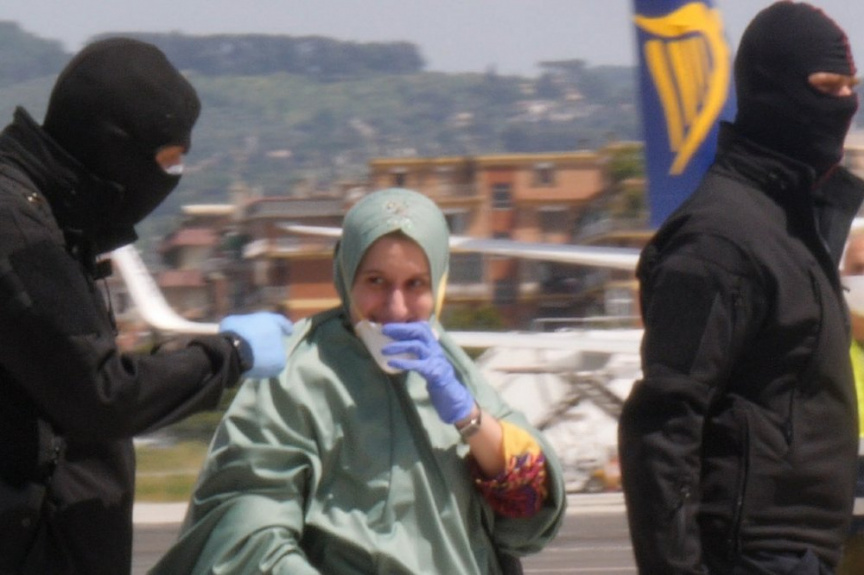 In this image taken from a video, Silvia Romano is flanked by two masked security officers as she walks on the tarmac after landing at Rome's Ciampino airport, Sunday, May 10, 2020. (AP Photo/Paolo Santalucia)

ROME (AP) — Wearing a surgical mask, disposable gloves and booties to guard against COVID-19, a young Italian woman returned to her homeland Sunday after 18 months as a hostage in eastern Africa.

Silvia Romano lowered her mask briefly to display a broad smile after she stepped off an Italian government plane at Rome-Ciampino International Airport. She hugged her mother and other family members, and touched elbows instead of shaking hands with Italian Foreign Minister Luigi Di Maio.

Romano, 24, was working as a volunteer with an Italian humanitarian group when she was abducted in November 2018 during an attack by gunman in Kenya. Italian Premier Giuseppe Conte has thanked the Italian intelligence agents who worked for her release, which took place Friday in Somalia.

Romano was taken to the Italian Embassy in Mogadishu after she was freed. Rome-based prosecutors investigate crimes committed abroad against Italian citizens, and they are expected to question her about the kidnapping.

Italian news reports said the abductors eventually passed her into the hands of militants linked to Somalia’s al-Shabab Islamic extremists. Al-Shabab has been blamed for a series of kidnappings of foreigners along Kenya’s coast.

Friends and acquaintances in the Milan neighborhood where Romano’s family lives applauded from windows, balconies and on the streets when the plane carrying Romano home landed in Rome.

Italian media also have reported that she converted to Islam while in captivity. Neither her family nor Italian officials have commented on the assertion. When she got off the plane, Romano wore a loose-fitting garment over her hair and African outfit.