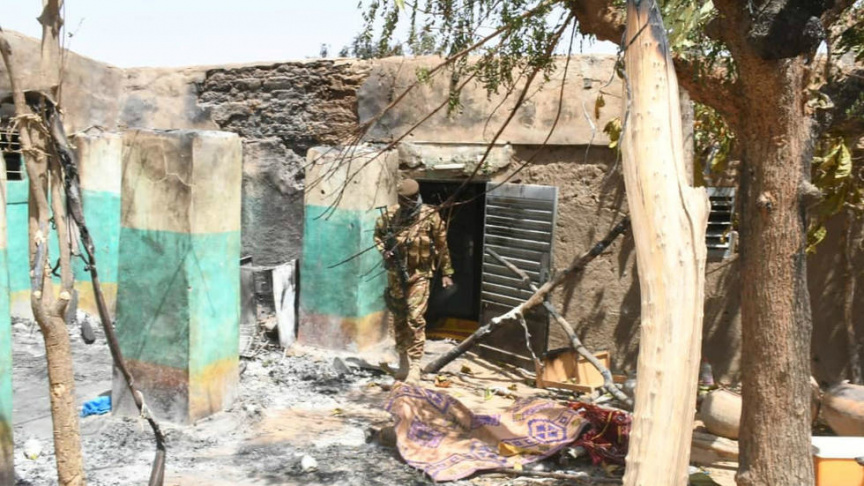 A soldier walks through the damage after an armed attack on the village of Ogossagou in Mali on March 25, 2019. (Photo/Malian Presidency/handout via Reuters)

The gunmen attacked the village of Ogossagou in the Bankass circle in the central Mopti region, the government said. The attackers burned homes and looted livestock, it said.

Mali’s government condemned the attack, saying it will investigate and bring the perpetrators to justice.

The U.N. mission in Mali said it sent a quick reaction force to the village, where several were also wounded. It also provided air support to prevent further attacks and evacuate the wounded, it said.

The head of the U.N. mission in Mali, Mahamat Saleh Annadif, said he was shocked and outraged by the attack.

“At a time when we were receiving positive developments from the north of the country, what is happening in the center is appalling. I strongly condemn it. There is an urgent need to break the spiral of violence in this region,” he said.

The Peuhl organization in Mali, known as Tabital Pulaku, blamed members of the Dogon militia.

In March, more than 150 civilians were killed in the same village in an attack also blamed on the Dogon militiamen.

More than 450 civilians were killed in central Mali last year by armed groups, making it the deadliest year in the region since the country’s crisis began in 2012, according to Human Rights Watch.

Ethnic clashes have been ongoing and exploited by Islamic extremists who have been recruiting men from the Peuhl ethnic group to their cause. Dogon militias have also arisen and are accused of supporting Mali’s military crackdown on jihadis.

Lesotho’s prime minister to be charged with murder