Nasheed: Development cannot be halted despite changes to natural order 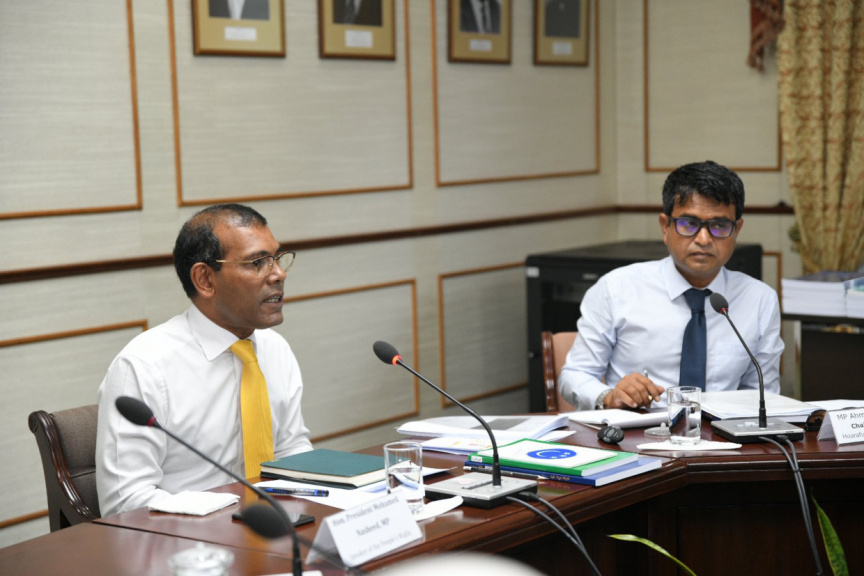 Mohamed Nasheed is seen speaking at an emergency meeting of the Environment and Climate Change Committee of the Parliament on January 29, 2020, regarding islands in the Maldives heavily affected by erosion. (Photo/Parliament)

Former Presdient of the country and current Speaker of the Parliament Mohamed Nasheed has stated that even if the natural environment of the country is affected by factors other than human conduct, development and providing fundamental services to the citizens cannot be halted.

Nasheed, who is a well-known climate change advocate was speaking in and emergency meeting of the Parliament’s Environment and Climate Change Committee when he stated so.

Kendhoo MP Ali Hussain also stated in the meeting that massive infrastructure projects needed to be halted and the safety of the citizens should be prioritized at first.

“We shouldn’t drop our priority on providing basic services such as water supply and sewerage to citizens. We should put a halt on the land reclamation projects to be started. I do not believe that we should reclaim land for new islands without protecting the islands we inhabit. We should postpone the projects to reclaim land from 23-meter-deep seas. I think we should halt the massive harbor and bridge projects.” said Ali Hussain.

The order of priorities must be changed, according to MP Ali Hussain who questioned the government whether the safety of the citizens should be prioritized before moving on to massive infrastructure projects.

“I very much agree that there are things we do. I came here very much interested and one thing I can see is that a huge change is brought as a result of actions that are not ours. It seems that even if we stop what we do, the changes might not stop.” said Nasheed.

He then stated that we should not think that a person living in Thuraakunu might not want the same services available from Male’, before stating that basic services and development could not be halted.

Islands in the Maldives are being heavily affected by unusual levels of erosion. They include islands from G.A, G. DH, N. B. R. atolls. Experts have attributed these changes to human activity coupled with climate changes. Destruction of reefs, sand mining and harbor construction are some of the activities that led to these changes, according to experts.