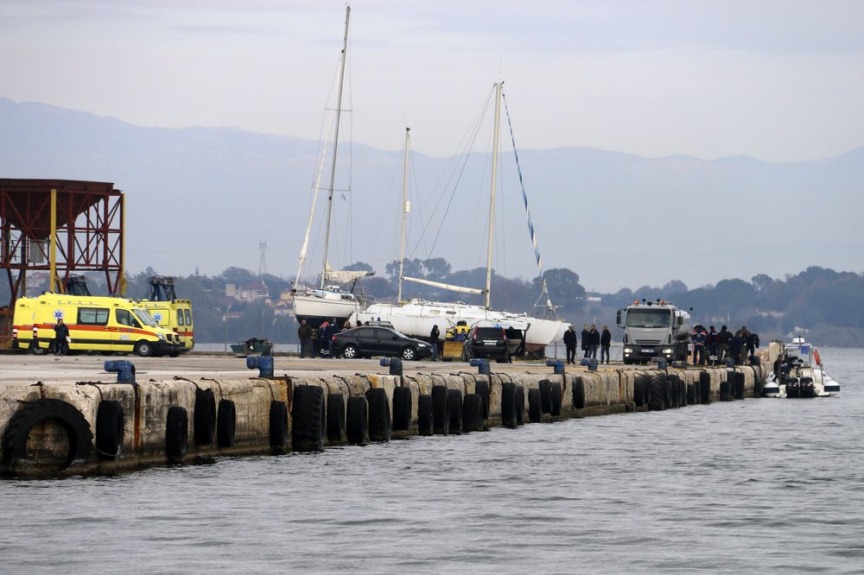 Greek authorities at the scene, on the port of Preveza, northwestern Greece, Saturday, Jan. 11, 2020. Greece's coast guard says 12 migrants have been found dead in the Ionian Sea and 21 others have been rescued after their boat took in water and sank. Searchers are looking for more survivors. (Andriana Soldatou/mypreveza.gr via AP)

ATHENS, Greece (AP) — Greece’s coast guard said 12 migrants were found dead in the Ionian Sea and 21 others were rescued after their boat took on water and sank Saturday. A search for more survivors was launched by air and sea.

The dead and rescued migrants were found southwest of the Greek island of Paxos, a coast guard spokesman told The Associated Press, speaking on customary condition of anonymity because of the ongoing investigation.

“The initial report is that 50 people were in the boat,” he said.

The coast guard said someone called Greece’s 112 emergency number from the boat at 9:15 a.m. Saturday. At least four merchant ships, six coast guard ships and a helicopter searched for survivors amid calm seas.

In separate incidents that illustrated other routes and methods used by Europe-bound migrants, authorities in North Macedonia said Saturday that 62 migrants were discovered hidden inside freight trains at the border with Greece.

Border control teams that included officers from North Macedonia, Austria and the Czech Republic found 42 migrants during a routine inspection of a freight train in the town of Gevgelija on Friday. Thirty-eight of the migrants were from Morocco, police said.

Later Friday, another multinational team of officers discovered 20 migrants o from Pakistan, Afghanistan, Morocco and Algeria, in another freight train at the Gevgelija station.

All 62 migrants, including five minors, were taken to a detention center pending deportation to Greece.

4 EU nations to take in 64 migrants from aid ship