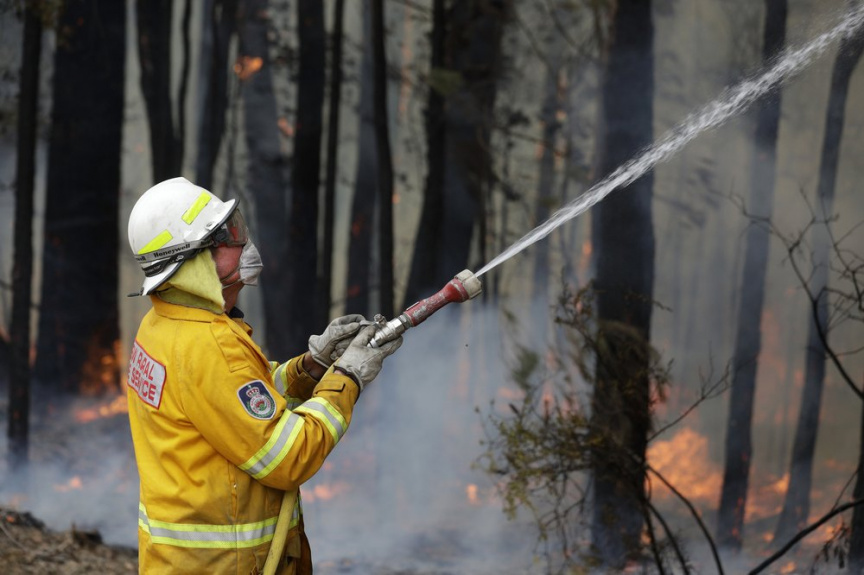 A firefighter manages a controlled burn near Tomerong, Australia, Wednesday, Jan. 8, 2020, in an effort to contain a larger fire nearby. Around 2,300 firefighters in New South Wales state were making the most of relatively benign conditions by frantically consolidating containment lines around more than 110 blazes and patrolling for lightning strikes, state Rural Fire Service Commissioner Shane Fitzsimmons said. (AP Photo/Rick Rycroft)

TOMERONG, Australia (AP) — Residents in the path of wildfires razing southeast Australia were urged to evacuate on Thursday if they don’t intend to defend their homes as hot and windy conditions are forecast to escalate the danger over the next two days.

The Rural Fire Service in New South Wales state has told fire-weary community meetings south of Sydney in the coastal towns of Nowra, Narooma and Batemans Bay that northwesterly winds were likely to once again drive blazes toward the coast. Vacationers have retreated to beaches and into the ocean in the area in recent weeks as destructive fires and choking smoke have encroached on the tourist towns, scorching sand dunes in some places.

“We can’t guarantee your safety and we don’t want to be putting emergency services — whether it be volunteers or paid staff — we do not want to put them in harm’s way because people didn’t follow advice that was given,” Victoria Premier Daniel Andrews said.

The unprecedented fire crisis in southeast Australia that has claimed at least 26 lives since September, destroyed more than 2,000 homes and shrouded major cities in smoke has focused many Australians on how the nation adapts to climate change. Prime Minister Scott Morrison has come under withering criticism both at home and abroad for downplaying the need for his government to address climate change, which experts say helps supercharge the blazes.

Last year was Australia’s hottest and driest on record. The Bureau of Meteorology’s head of climate monitoring, Karl Braganza, said while the country’s rainfall was expected to pick up a bit, it wouldn’t be enough to snuff out the blazes anytime soon.

“Unfortunately, we’re not looking at widespread, above-average rainfalls at this stage,” he said. “That’s really what we need to put the fires out fairly quickly. It is going to be a campaign, in terms of the fires. We are not looking at a short and sharp end to the event — it looks like something that we will have to persist with for some time.”

The New South Wales government responded to the crisis on Thursday by announcing an additional 1 billion Australian dollars ($690 million) to be spent over the next two years on wildfire management and recovery.

The Australian disaster is seen by many as a harbinger for other countries of the future consequences of global warming.

Pope Francis has joined world leaders in expressing solidarity with the Australian people.

“I’d like to ask for you all to pray to the Lord to help the (Australian) people at this difficult moment, with these powerful fires. I’m close to the Australian people,” Francis said at the end of his general audience on Wednesday, drawing applause from congregants.

Around 200 stranded whales die in Australia