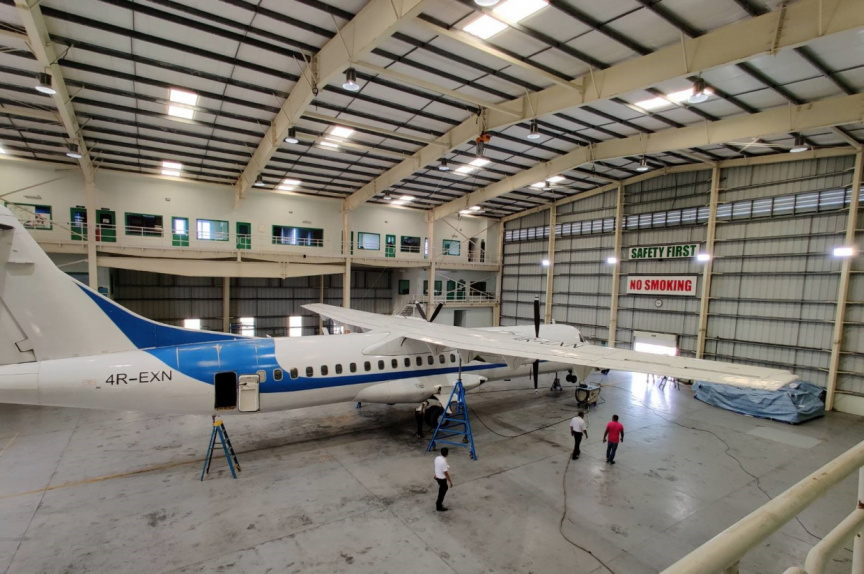 Villa Air became the first Maldivian company to repair and conduct maintenance of a foreign aircraft in the Maldives on December 26, 2019. In this photo, the aircraft of FitsAir which was repaired and conducted maintenance on by Villa Air is seen in the Maintenance and Overhaul facility of Villa Air based in A. Dh. Maamingili.

Villa Air has become the first Maldivian company to repair and conduct maintenance of a foreign aircraft in the Maldives.

An aircraft of the FitsAir, a charter airline from Sri Lanka, landed in Maamingili airport yesterday to carry out heavy maintenance in the Maintenance and Overhaul facility of Villa Air based on the island. Villa Air stated that this was the first opportunity for a Maldivian company y to repair and conduct maintenance on a foreign aircraft.

The company also noted that the Sri Lankan Civil Aviation Authority had permitted the company to carry out the maintenance of the ATR 202-72 aircraft, after inspecting the facility.

Villa Air also thanked the Maldivian Civil Aviation Authority, Immigration, Maldives Customs among other institutions for paving the way to accomplishing this feat.

The company noted that it had had the capability to conduct such operations for years, and was working with the aim to become a regional facility and provide engineers with opportunities.