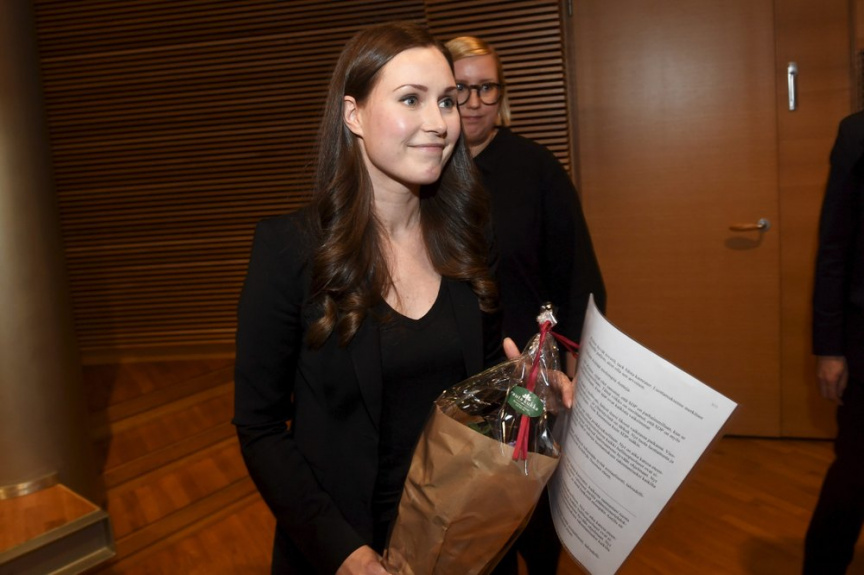 The candidate for the next Prime Minister of Finland, Sanna Marin, smiles after she won the SDP's Prime Minister candidate vote against Antti Lindtman, in Helsinki, Finland, Sunday, Dec. 8, 2019. A 34-year-old minister and lawmaker has been tapped to become Finland's youngest prime minister ever and its third female government head, replacing former Cabinet leader who resigned Tuesday. (Vesa Moilanen/Lehtikuva via AP)

COPENHAGEN, Denmark (AP) — Finland’s next government is breaking the mold in multiple ways.

Sanna Marin, the 34-year-old transport minister, was tapped over the weekend by the ruling Social Democratic Party to be Finland’s new prime minister. When she takes the reins of the country, most likely on Tuesday, she will become the world’s youngest sitting head of government.

In another unusual development, Marin will head a coalition with four other parties that are all led by women — three of whom are in their early 30s. Her own biography also breaks the mold: Raised by a single mother, she has described feeling discriminated against in Finland when her mother was in a relationship with another woman.

Elina Penttinen, a lecturer in gender studies at the University of Helsinski, said the rise of so many women is “exceptional” not only by the standards of the wider world, where older men hold most power, but even by the standards of Finland, which regularly ranks as one of the best countries in the world for gender equality.

“Here it seems pretty amazing, too,” she said.

The Social Democrats emerged as the strongest party after Finland’s election in April. Antti Rinne, the incumbent prime minister whom Marin is replacing, stepped down last week amid political turmoil caused by a strike of postal workers. Rinne says he plans to continue as the Social Democrats’ leader until a party congress next summer.

Finland, like much of the West, has seen a rise in right-wing populists and the nationalist Finns Party did well in April election, though centrist and left-wing parties won most votes and together could govern in the multi-party coalition.

“I hope it’s a sign of more change to come against populists, especially in the age of Trump and populism,” Penttinen said.

A tweet by a journalist for Finnish newspaper Helsingin Sanomat with photos of the quintet drew attention online by visually underscoring the idea of rising female power in politics.

Marin will become the youngest-serving leader of a government in the world, beating out Ukraine’s 35-year-old prime minister, Oleksiy Honcharuk. She might not hold that title for long, however. Sebastian Kurz, the 33-year-old former Austrian chancellor who rose to that position when he was 31, won an election in September and is in talks to form a new governing coalition that would put him back in the job.

Marin joins a small group of female leaders who have sought to counteract the rise of populism. That group includes Slovakian President Zuzana Caputova, 46, a progressive whose election this year bucked the trend of populism and nationalism in Central Europe.

And like New Zealand Prime Minister Jacinda Ardern — who is 39 — Marin is a new mother, having given birth to a daughter last year.

A lawmaker since 2015, Marin is the party’s vice chairwoman and was minister for transport and communications in the outgoing government.

Lawmakers are likely to approve the new government this week so Marin can represent Finland at a summit of European Union leaders in Brussels on Thursday and Friday. Finland holds the EU’s rotating presidency until the end of the year.

Beside Marin, the coalition’s other party leaders are 32-year-old Katri Kulmuni of the Center Party; the Left Alliance’s Li Andersson, 32; Maria Ohisalo, the 34-year-old leader of the Greens; and the head of the Swedish People’s Party, Anna-Maja Henriksson, who at 55 is the oldest.

The coalition will have a comfortable majority of 117 seats in the 200-seat Eduskunta, or Parliament.

The Center Party announced Monday that Kulmuni will be the finance minister in the new government.

Marin will be Finland’s third female government leader. Women have been present in politics in the Nordic region for decades and today represent half of the party leaders in Sweden. Four of Denmark’s nine parties are headed by women.

Mette Frederiksen became Denmark’s prime minister in June, while Erna Solberg has been Norway’s head of government since 2013.

Iceland’s Vigdis Finnbogadottir was the first woman to be democratically elected as head of state by voters when she defeated three men for the presidency in 1980.