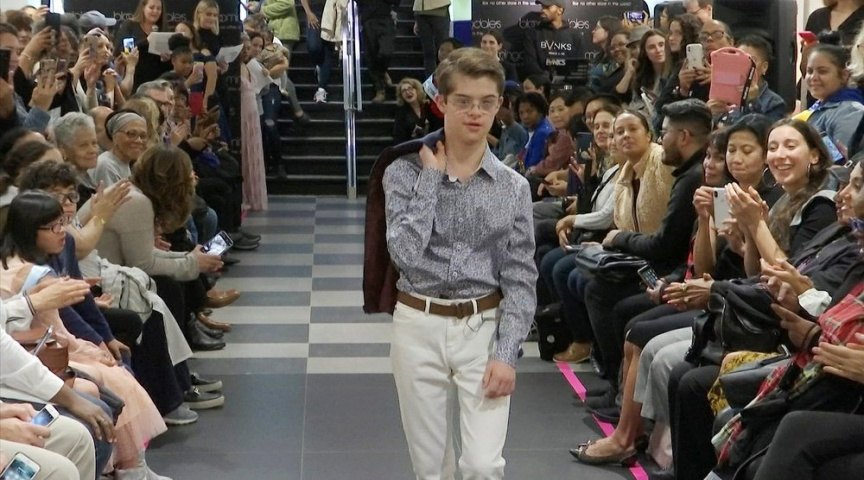 This image from video taken on Wednesday, Oct. 16, 2019 shows a boy participating in the 2nd annual “Gigi’s Playhouse Fashion Show” in New York. Gigi’s Playhouse is an education and achievement center that prepares young people with Down syndrome to engage more fully in their homes, schools and communities. (AP Photo/Gary Gerard Hamilton)

NEW YORK (AP) — One model sashayed down the runway with a leather jacket and a guitar, basking in applause from the crowd. Another danced and strutted in a multicolored bomber coat.

A toddler had a little help with her modeling turn, holding on to an adult as she wore a peach outfit with a tutu. And another young woman wore a leopard coat over a T-Shirt with the message: “Go Love Yourself.”

Though New York’s Fashion Week wrapped more than a month ago, there was plenty of fierce fashion at the second annual “Gigi’s Playhouse Fashion Show” on Wednesday, an event that allows young people with Down syndrome to share their talent.

Gigi’s Playhouse is a national education and achievement center that prepares young people with Down syndrome, from infants to teens, to engage more fully in their homes, schools and communities. Eileen McClary, an associate for the New York chapter and director of the fashion show, said the event was an effort to let its members be advocates for the center.

“I think it’s clear from all of the models that it was a wild success, and it kind of blends the two intersections of my life, which are philanthropy and fashion,” she said.

Laura Lyle, 16, one of the models, was beaming after the show.

“It was really fun. I loved walking down, showing everybody the outfits, and I feel like we’re making a difference,” she said.

Malik Jabbar, 15, who modeled last year, said some of the participants may have found their next calling. “We walked down the aisle, we see beautiful faces, and the smiles on (all of) us,” he said. “In the future, we’ll all become the next top 10 models.”

An after-party helped raise money for the chapter. While there were lots of hands needed to put on the event, including Gigi’s Playhouse staff, Bloomingdale’s and volunteers, McClary said seeing all the happy faces on the catwalk and in the audience made it all worth it.

“It just shows the power and just involvement of this (Down syndrome) community, and I can’t wait to do more things with them,” she said. “To me, it’s one of the most inspiring things that you could ever be a part of. ... All of these models are some of the happiest people I’ve ever come in contact with. And if you ever want to feel joy like I think this entire store felt tonight, you can be a part of this.”

How to clean the bundle of germs that is your phone