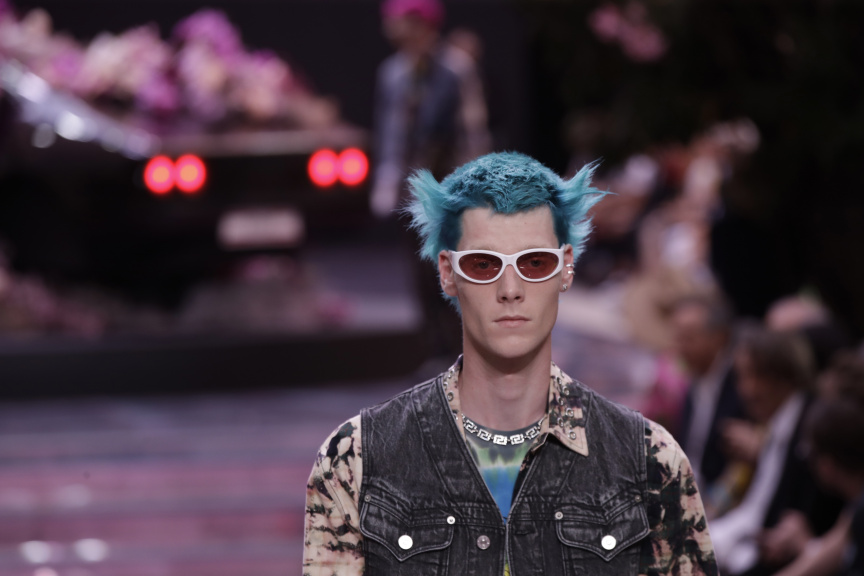 A model wears a creation as part of the Versace men's Spring-Summer 2020 collection, unveiled during the fashion week, in Milan, Italy, Saturday, June 15, 2019. (AP Photo/Luca Bruno)

MILAN (AP) — Milan Fashion Week for spring/summer menswear previews has started with a slightly different rhythm, with many mainstays not showing this season.

It is a sign of the times that fashion houses are seeking new ways to reach their audiences, and slotting menswear into womenswear shows by now is old hat. Gucci and Bottega Veneta are among the houses choosing that path, and skipping the June round of shows.

And this year, Pitti Uomo in Florence got a boost as the chosen venue for Ferragamo, which normally shows in Milan, and Givenchy, which makes Paris its home. Prada went abroad to Shanghai for its menswear Spring/Summer 2020 preview.

Still there was a lot left to see in Milan and here are some highlights from Saturday's shows:

The Versace man is not afraid of playing with his femininity as he looks for new ways to express his sexiness. His also a coming of age story.

Dontatella Versace has tapped the soul of fashion house founded by her brother, the late Gianni Versace, with modern sex appeal, animal prints and loud fluorescents.

The looks play on the fashion house's iconic bondage moment, mixing the shiny leather with more mundane looks, like blazers and jacket. A shimmery leopard men's top embroidered with Gianni Versace's signature in silver peeks out of a knit vest, with black trousers and a cross-body bag that embrace of femininity. Shimmery leopard prints were paired with slim trousers patterned with ancient vases.

"It's not necessarily about femininity. It is more about the confidence a guy has to express himself in a more flexible way," said head menswear designer Ashley Fletcher.

The flexibility was clear as models including Gigi Hadid, her sister Bella Hadid and Irina Shayk exhibited the same looks : Gigi Hadid, for example, wearing a belted leather trench with hardware details over bare legs but with the same blue shirt and tie as the men -- who also showed leg with the same look but with Bermuda shorts. Suit coats and jackets for him and her featured half-and-half Prince of Wales plaid and solid black, worn with a suit shirt, tie and black leather lace-up pants.

Racing car motifs symbolized a coming of age and embrace of grown-up toys. The other repeating motif was the Gianni Versace signature, vertically running on ties and socks.

"For every young man, the first car has a strong meaning." Versace said. "It's independence, maturity, but above all freedom."

Versace dedicated the show to Keith Flint of the British band The Prodigy, a friend of Versace's who died earlier this year. His song "'Smack my Bitch Up" opened the runway show -- and some models wore brightly dyed hair in his image, wearing acid-wash denim and tie-dye tops.

The Emporio Armani man is active, ready to parachute into any situation. The looks were strong on flat-out active wear, and leisure wear for the active soul, with an unstructured silhouette and light technical textiles.

Organza surfaces on suits gave a sleek, youthful sheen. Trousers were either wide palazzo pants or ready-to-jump parachute pants, while jackets were both double-breasted and single-button. Suits anchored the collection, and the inclusions of ties, sometimes with a loose knot and upturned shirt-collars signaling quitting time, offered a note of serious elegance.

But collection also had a strong sporty vein, with blousons, anoraks and light-weight overcoats.

"Men should shine," Armani said after the show.

The line for youthful — not necessarily young — dressers included harnesses reminiscent of a parachute drop, to which bags could be strapped. Caps had aviator glasses built in. Colors were mostly dark neutrals with flashes of red — especially striking on a pair of belted suits — blue-greens and green-blues, as well as orange melting into bronze.

Some 30 Olympians and Paralympians introduced the looks for the 2020 Games in Tokyo that projected Armani's often-expressed love of Japan, with the red rising sun of Japan transformed with the green-white-and-red of the Italian flag.

The president of the Italian National Olympic Committee, Giovanni Malago, was on hand for the rollout. He praised Armani as the designer "who has given the most trust to the world of sports and to the teams that represent our country."

Taking a lone turn on the runway to close the show was professional race car driver Alex Zanardi, who lost both legs in a racing accident in 2001.

Armani previously designed the Italian Olympic and Paralympic uniforms for the Summer Games in London in 2012 and Rio de Janeiro in 2016, and for the Winter Games in 2014 in Sochi, Russia, and in 2018 in Pyeongchang, South Korea.

The designers departed from their recent spectacles, with a simply staged show down a leopard-clad runway with a lush, tropical background. There were no drones, no influencers, no performers and no selfies being projected onto runway screens.

The silhouette had a 1940s influence, with high-waist trousers and short-waist jackets with safari pockets and of course Panama hats.

Pin-up girls served as a repeating motif, with such tongue-in-cheek slogans as "Bring Me to the Moon," ''Chill & Love," and "Choose Me," which may fit the ethos of reality shows like "The Bachelor," but seem slightly out of step with the #MeToo movement.

German designer Philipp Plein has imagined a dystopian future where luxury glam survives and everyone worships the rock band Kiss.

A fleet of rag-tag, fire-spouting vehicles including a robotic dinosaur, monster trucks, motorcycles and patched-up military trucks roared into the big warehouse to open the show. A rock band played on the back of an open-bed tractor trailer and drummers pounded on plastic barrels. Fire-twirling dancers seemed to suggest one surviving tribe.

Hair was decorated with spikes, and faces covered with half-skeleton masks, or painted like Kiss band members with big spikey dark eyes and white face.

A fashion show for Down syndrome models