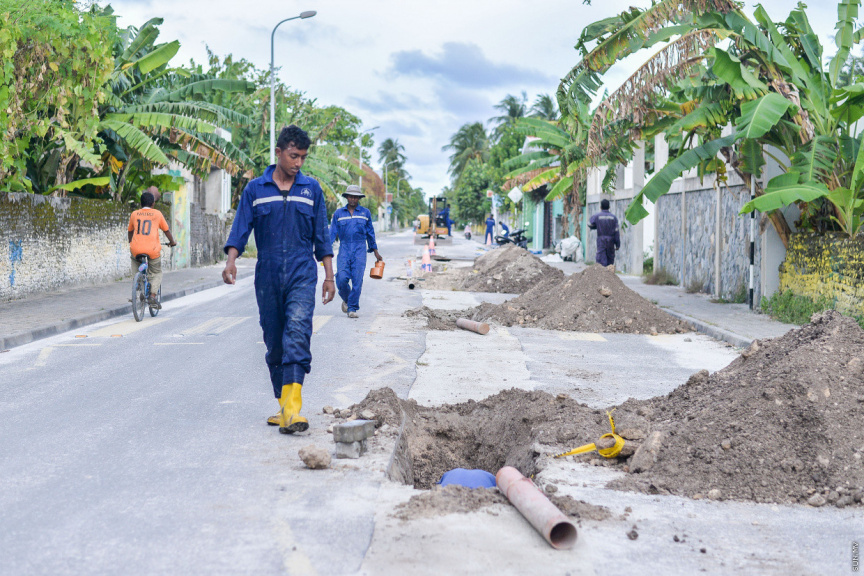 Roads of Feydhoo in Addu: the work on the sewerage system is still being carried out. (Sun Photo/ Fayaz Moosa)

Addu city is the next most populous city in the Maldives after the capital Male'. Ten years have gone by since it was categorized as a city, and its people are not content with the fact that it is still deprived of some of the most basic necessities. The sewerage system of Addu city is one of the highlights on that list.

"The water in the city is very much contaminated due to the lack of a good sewerage system. We have been using contaminated water for all these years and in some areas the water smells extremely bad, it is not safe to use," a resident of Addu city shared his concerns.

"Every administration shows us dreams. With no sewerage system, the city has seen a rise in the mosquito population and has become a nest of mosquitoes. the situation is the same in Hithadhoo, Feydhoo, Maradhoo and Maradhoo-Feydhoo," the resident continued.

The sewerage system in the works for 10 years!

2014 saw the project of central Hithadhoo's sewerage project be given to a company with the date of completion set for 2015. The work on the systems of South Hithadhoo and North Hithadhoo was set to be completed last year with the total cost of the project rising higher than 100 million.

The deputy mayor also stated that everything had to be started from scratch or "zero" and that all the work that was done before, had been for waste. "It is a huge issue that it has taken this long. The damage and inconvenience caused to the equipment and accessories due to a lack of care was another challenge faced," said Yasrif.

During the administration of President Yameen, the council was not privy to the development of the city and had little to no role in the projects, according to the deputy mayor Yasrif.

He stated that the projects in South Hithadhoo and North Hithadhoo were nearly complete and what remains now is to fix the connections to the residences. However, there are still some technical works in progress in Central Hithadhoo, according to Yasrif.

Fenaka Corporation, the company in charge of the projects estimated that the projects will be completed by September.

Maradhoo, Maradhoo Feydhoo, and Feydhoo welcomed tar roads before a sewerage system due to the SAARC summit in 2011. Pipes are being installed with the roads being dug up the middle.

"Son, we don't know when this will end. They are always digging, digging and digging. They have dug up and destroyed the roads now. Unless it is done I won't believe that the project is complete. They are carrying it out with no plan whatsoever," this was the response of an elderly resident of Feydhoo when questioned about the sewerage system of Feydhoo.

The council stated that when the roads were built, space was left on the sides for the pipes, but the next administration laid the pipes in the middle of the roads. "We are now in discussion with the government and MTCC to lay down an extra layer of tar over the roads after the pipes have been laid," Fahmy Ahmed, the councilor for Feydhoo on the Addu city council stated. He also stated that he expected the projects to be completed in the next two months.

The sewerage projects in Addu city has been in shambles and in limbo due to the changing administrations. The good news for the huge population of Addu city is that they are finally blessed with a ray of hope as the project's completion is just over the horizon. But let's not forget that there are citizens who are also refusing to believe the projects unless they are fully completed.

This huge population had to survive and take the brunt of being deprived of a basic necessity only because of the changing administrations rolling in and out of the political spectrum.

The story of Adeeb's audacious escape