The independence gained by the unyielding determination of Nasir 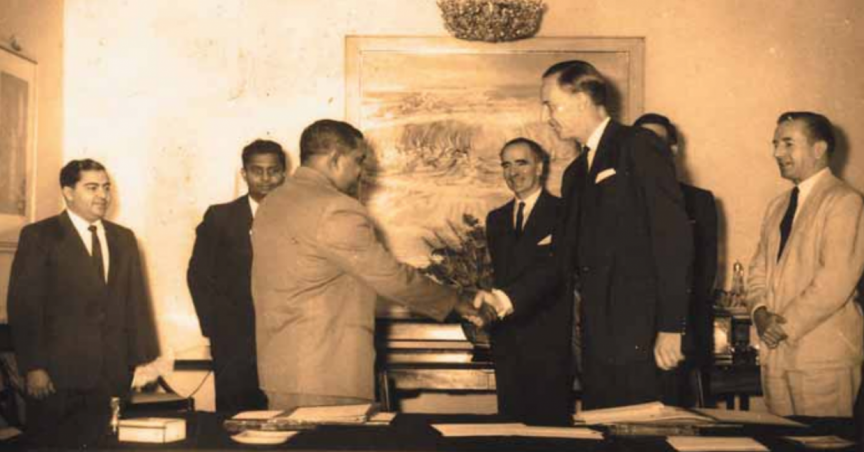 The meeting to sign the agreement of independence was held on July 26, 1965 in Ceylon. (Photo/ Dhivehi Digest)

The Maldives went through a lot of changes and challenges in the 20th century. The country’s transformation into a republic and the monarchy into an elected form of government that saw the return of the old age monarchy once more before it disappeared forever happened in the within those 100 years. The resented era when the Maldives underwent the “protection” of the British which finally saw the Maldives convert itself into an independent republic in its full form was also witnessed in the 20th century.

The country also saw rebellions rising from its midst during this era. These challenges were all addressed in the same century when some truly remarkable individuals whose names the political spectrum will never forget, rose. And from all these individuals all Maldivians would agree that the most noteworthy name is of former President Ibrahim Nasir.

A man of few words

One of the men who had a leading role in the unique journey that the Maldives took to gain its independence from the British was Abdul Sattar Moosa Didi who was stationed in Ceylon or Sri Lanka. He stated that a lot of credit in the Maldives gaining its independence should go to the headstrong and admirable policy that the then President Ibrahim Nasir used.

President Nasir was a man of few words and earnestly listened to his advisors but never spoke too much, even if it was to clarify these suggestions by his advisors. He hardly spoke and when he did, most of the time it was in the form of questions. What he should be praised and appreciated for is the flawless victory he gained from the British at a time when the country was under British rule and had little or limited control whatsoever over its administration.

The unyielding stance against the British

The Addu situation or the beginning of the Addu rebellion first started up with a meeting between the then Prime Minister Ibrahim Faamudheyri Kilegefaanu and the British in 1956. The Prime Minister entered into an agreement during this meeting to lease 100 acres of land from Gan and Hithadhoo for GBP 2000 for 100 years. He did so without discussing it with his cabinet back home. The agreement in Ceylon was just the initial signing ceremony and the real agreement was planned to be signed in Male’.

The Prime Minister returned to the Maldives to present the agreement from Ceylon to his cabinet and as well as the final agreement. However, he was met with staunch and surprising opposition from the youngest member in his cabinet, Ibrahim Nasir. Ibrahim Nasir was adamant that no such agreement should ever be accepted. But in the end, his disapproval was not enough and saw the initial agreement signed in Ceylon pass the cabinet, but his efforts were enough to ensure that the final agreement did not see the same success.

His stance saw the British search for a way to have this agreement signed. Ibrahim Nasir refused to even meet the representative who visited his home with a letter from the British High Commissioner to Nasir. His only reply was to “Inform the High Commissioner that official letters are not to be sent to the home of the Foreign Minister but to the Foreign Ministry itself when the government opens”. On March 10, 1958, the final draft of the agreement was rejected in the parliament.

Other high-ranking members of the administration and parliament got the power and confidence to stand up to the British leaders through the young Nasir and his vigilance, which resulted in an improvised agreement being signed with the British. This agreement was known as the “Alport Agreement” and even saw the British agree to give Maldives GBP 850,000 of free aid, which would be utilized for developing different sectors such as the healthcare, communication and fishing industry of Maldives.

When the British did not get their desired results, they conspired to create a separate independent nation in the south for this purpose, by enticing the three southernmost atolls of Huvadhoo, Fuvahmulah, and Addu of the Maldives. On January 3, 1959, the British got their wish and a separate nation named as United Suvadive Islands was declared.

The man who was at the helm of this rebellion, Abdulla Afeef was a distant relative of Nasir. However, this meant little to Nasir who put this factor aside and decided his emphasis and duty would be to his country.

A fact that infuriated Nasir later when he officially learned of it during a meeting with a British representative. President Nasir flared up at this and angrily protested that a Maldivian on Maldivian soil cannot be taken away from the Maldives without the permission and knowledge of the government, not even by the British. This resulted in a similar fashioned response from the British representative who pointed out that the Maldives was a protectorate of the British which meant that it can do so as it wishes. However, Nasir was not ready to budge and declared that he would not meet any representatives of the British until they agreed to end the protectorate agreement and start talks of regarding the independence of Maldives.

Independence without any conditions

The Maldives was under the “protection” of the British, however, President Nasir was steadfast in his approach that he would not give even an inch to the British. Resulting in the British finally conceding defeat and agreeing to hold talks of independence with the Maldivians. The talks began on August 12, 1964, in Ceylon.

The British had drafted an agreement of independence and President Nasir communicated with his envoy in Ceylon, Mr. Abdul Sattar Moosa Didi on what amendments should be brought to the agreement. He acted as the go through communicator and negotiator on behalf of President Nasir to the British. This ended with an agreement that both parties were content with.

Those who experienced those testing times still say that even though there was the probability that the British would eventually have given up the Maldives, had it not been for the courageous work of Nasir, Maldives would have been the same as Ceylon back then. The Maldives got its full independence on July 26, 1965. The agreement was signed by the then President Ibrahim Nasir and His excellency Sir Michael Worker.

The man who brought independence to this country would later resign from the presidency but remain on his home soil until December 7, 1978. He left the country to live in Singapore where he would spend the rest of his days until he passed away on November 22, 2008.

Addu's sewerage system to be completed after 10 years!