Police tow No. 2 leader of Venezuela congress to jail in car 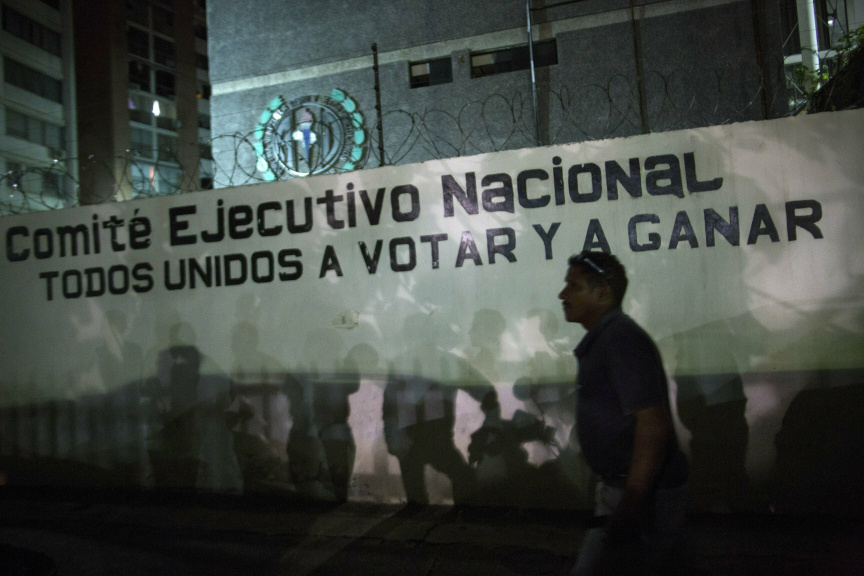 National Assembly Vice President Edgar Zambrano was leaving his Democratic Action party's headquarters when he was surprised by a commando unit from the feared SEBIN intelligence agency who surrounded his car.

A half hour later, the officers towed the vehicle away with the lawmaker still inside, at the same that Maduro was speaking live on state TV inaugurating an agricultural project. Neighbors looking on shouted "assassins" as the heavily armed agents pulled away.

"We democrats we will keep fighting!" Zambrano tweeted as he was hauled off.

The arrest was the first following the opposition's fizzled uprising that started early on April 30 outside a Caracas air base. It was led by Juan Guaidó, head of the National Assembly who is leading the U.S.-backed effort to end what he calls Maduro's dictatorship.

Zambrano, 63, was one of the first opposition leaders to answer Guaido's call for an insurrection, going to the bridge in Caracas where the opposition leader had appeared at dawn with a small cadre of soldiers ready to rebel against Maduro.

A lawyer by training, Zambrano is seen as a conciliatory figure within the opposition who is close to Henry Ramos, the former head of congress who has been accused of taking part in an earlier alleged conspiracy to oust Maduro. He took up his role as Guaido's deputy as part of a power-sharing arrangement among the biggest parties.

Government officials had announced that Zambrano and eight other opposition lawmakers faced investigation on charges of "betraying the homeland" and "instigating an insurrection," for their roles in last week's unrest.

Two hours before his arrest, Zambrano had told The Associated Press in a phone interview that he was not going to hide because "I have not committed any crime."

Government supporters have been pushing Maduro to order arrests in the aftermath of the failed uprising, which is the closest the opposition has ever come to ousting the president. But analysts say there are limits to how far Maduro can crack down, and that any attempt to arrest Guaidó risks inviting a strong response from the U.S., which has warned of "grave consequences" should the opposition leader be harmed.

Earlier Wednesday, Maduro and the head of Venezuela's top court rejected a U.S. threat to apply sanctions to all its judges. They accused the Trump administration of trying to manipulate the crisis-wracked nation's justice system and foment a coup.

Maikel Moreno, president of the Supreme Tribunal of Justice, pushed back at comments by Vice President Mike Pence, who said the U.S. would extend sanctions to all members of the Venezuelan high court if they continued to be a "political tool" of Maduro.

"This unlawful, despicable and intolerable action violates the norms and principles of international law that govern relations between civilized nations," Moreno, a political ally of the Maduro, said in a nationally broadcast TV appearance. Moreno already faces U.S. sanctions.

There is little sign that tension will break between Maduro and Guaidó, who is backed by the United States and more than 50 other nations.

Guaidó on Wednesday took to the streets of at least two coastal communities outside the capital, pushing to keep up the opposition's rejuvenated momentum. He met with supporters in his hometown of La Guaira and surrounding communities, where he was greeted by cheers, hugs and fist bumps.

More than 3 million Venezuelans have left their homeland in recent years amid skyrocketing inflation and severe shortages of food and medicine. Pence and other Trump administration officials blame Maduro's socialist policies and government mismanagement for Venezuela's economic crunch, warning that 2 million more people are expected to flee by the end of the year if the crisis continues.

The U.S. lifted sanctions on a top Venezuelan general who broke ranks with Maduro last week. Pence said the immediate lifting of financial sanctions for Gen. Manuel Figuera, who was Venezuela's spy chief, is intended to encourage others in the military to abandon their support for Maduro.

Figuera was the sole regime insider to defy Maduro during the uprising, although the White House contends several others, including Defense Minister Vladimir Padrino, had been in talks for weeks with the opposition to oust Maduro but backed away from the plan at the last minute.

On Wednesday, Maduro discharged Figuera from service along with 55 other soldiers accused of taking part in Guaido's uprising.

Among them was National Guard Lt. Col. Illich Sanchez, who oversaw protection to the opposition-controlled National Assembly and accompanied Guaidó during the uprising last week.

Maduro has fallen under increasing international pressure since winning a second six-year term in an election last May that critics say was rigged. Russia, China and Cuba, among other countries, support Maduro.

Maduro says he is the target of a U.S.-engineered coup plot. He harshly criticized the Trump administration in his speech Wednesday, saying its offer to lift sanctions against members of the armed forces who turn against his government is an "assault on their honor and dignity."

"Donald Trump is racist and surrounded by crazies," Maduro said.

2 US ‘mercenaries’ among those nabbed after raid