Ukraine quiet ahead of presidential election 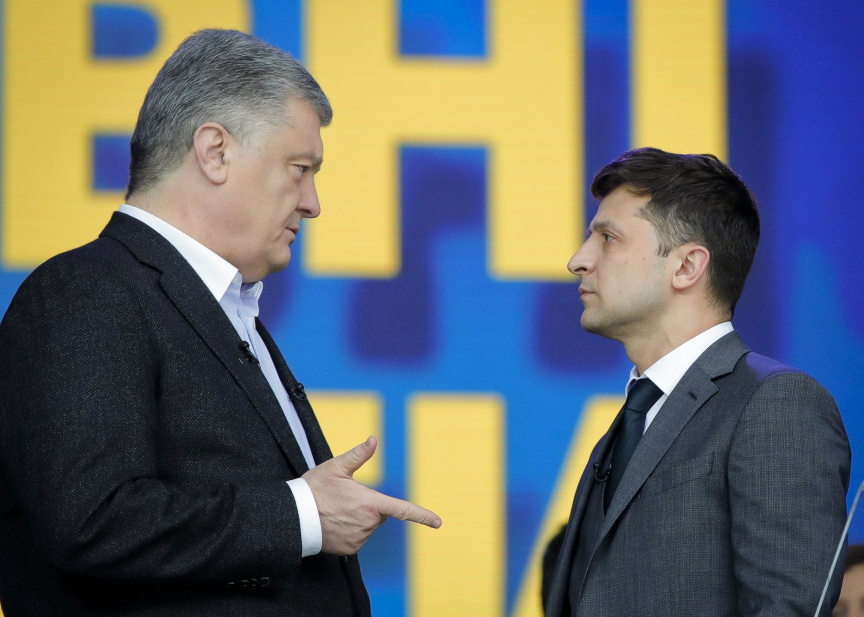 KIEV, Ukraine (AP) — A comedian who plays the role of Ukraine's president on television is set to take on the job for real, pushing out the man who currently holds the office, according to public opinion surveys ahead of Sunday's election.

Saturday was a so-called "day of quiet," on which electioneering is forbidden, a respite from a campaign of heated statements and unexpected moments.

Dismayed by endemic corruption, a struggling economy and a five-year fight against Russia-backed insurgents in the country's east, Ukrainian voters appear poised to strongly rebuke incumbent Petro Poroshenko and replace him with Volodymyr Zelenskiy. Despite never having held political office, Zelenskiy could get more than twice as many votes as Poroshenko, polls suggest.

Since Zelenskiy and Poroshenko advanced to Sunday's runoff in the first round three weeks ago, the campaign has been marked by jockeying for dominance, including a dispute over holding a debate that left Poroshenko standing next to an empty lectern bearing his opponent's name and Zelenskiy's challenge for both of the candidates to undergo drug testing.

Zelenskiy has run his campaign mostly on social media and has eschewed media interviews; Poroshenko has called him a "virtual candidate." Poroshenko in turn was criticized for a video linked to his campaign that showed Zelenskiy being run over by a truck.

The two finally held an actual debate on Friday evening, just hours before campaigning was to end. They harshly criticized each other and engaged in the melodrama of both kneeling to ask forgiveness of those who lost relatives in the eastern fighting.

In an unexpected move less than 10 hours before polls were to open, a Kiev court heard a suit demanding that Zelenskiy's registration as a candidate be cancelled. The court rejected the case, which was filed by the head of an organization that conducts election observation and claimed that Zelenskiy committed bribery by offering tickets to the Friday debate.

Zelenskiy, a 41-year-old comic actor, is best known for his TV portrayal of a schoolteacher who becomes Ukrainian president after a video of him denouncing corruption goes viral. The name of the show, "Servant of the People," became the name of his party when he announced his candidacy in January.

Like his TV character, the real-life Zelenskiy has focused his campaign strongly on corruption. Although criticized as having a vague platform, Zelenskiy has made specific proposals, including removing immunity for the president, parliament members and judges, and a lifetime ban on holding public office for anyone convicted of corruption. He also calls for a tax amnesty under which someone holding hidden assets would declare them, be taxed at 5% and face no other measures.

He supports Ukraine's eventual membership in NATO, but only if the country were to approve this in a referendum.

Zelenskiy has proposed that direct talks with Russia are necessary to resolve the conflict in eastern Ukraine, where fighting with Russia-backed separatist rebels has killed more than 13,000 people since 2014. The Kremlin denies involvement there and says it is an internal matter. Zelenskiy says Russia-annexed Crimea must be returned to Ukraine and compensation paid.

Zelenskiy's image has been shadowed by his admission that he had commercial interests in Russia through a holding company, and by persistent speculation about links with oligarch Ihor Kolomoyskyi, who owns the television station that airs "Servant of the People."

A Ukrainian court this week ruled that the nationalization of a bank once owned by Kolomoyskyi was illegal, leading to new concern about Zelenskiy's possible ties to him.

Poroshenko, who entered politics after establishing a lucrative candy-making company, came to power with a pragmatic image in 2014 after mass protests drove the previous, Russia-friendly president to leave the country.

Five years later, critics denounce him for having done little to combat Ukraine's endemic corruption. The war with Russia-backed separatists in the east grinds on with no clear strategy for ending it. And while his economic reforms may have pleased international lenders, they've left millions of Ukrainians wondering if they can find the money to pay their utility bills.

After his weak performance in the election's first round, in which Zelenskiy got nearly twice as many votes, Poroshenko said he had taken voters' criticism to heart. He has since made some strong moves, including the long-awaited creation of an anti-corruption court. He also ordered the dismissal of the governor of the corruption-plagued Odessa region, and fired the deputy head of foreign intelligence who reportedly has vast real estate holdings in Russia.

Poroshenko, 53, has positioned himself as a leader who will stand up to Russia. He has scored some significant goals for Ukraine's national identity and its desire to move out of Russia's influence.

He signed an association agreement with the European Union — which predecessor Viktor Yanukovych turned away from, setting off the 2014 protests. Ukrainians now can travel visa-free to the European Union, a significant perk. He has also pushed relentlessly for the Ukrainian Orthodox Church to be recognized as self-standing rather than just a branch of the Russian church.