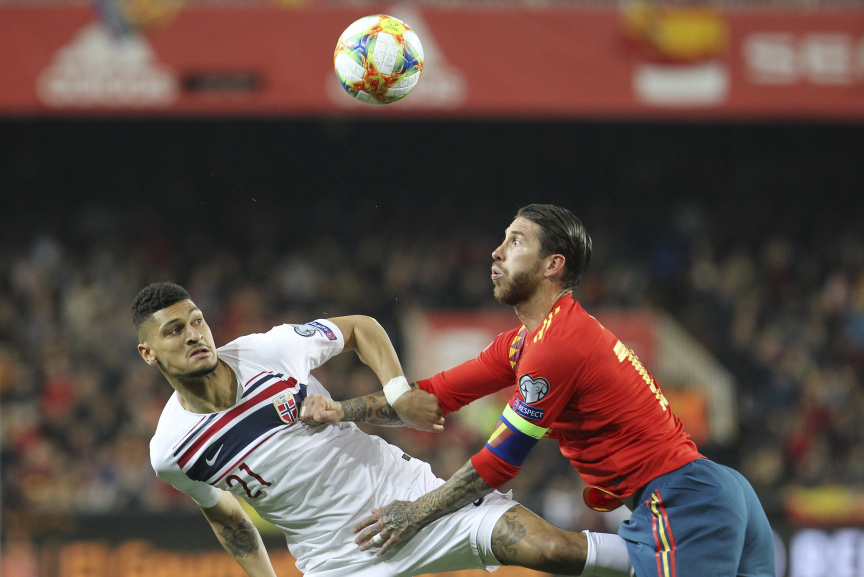 Spain needed to be bailed out by a veteran. Italy got a boost from some new faces.

The former European champions started their campaigns to qualify for Euro 2020 with wins over Scandinavian visitors on Saturday — but in different fashion.

The pressure is on Italy to recover from last year's embarrassing failure to not reach the World Cup. Spain likewise wants to use the European qualifying campaign to restore its status as one of the continent's best teams after losing to a less talented Russia in the World Cup last 16.

"When you start from zero there is always excitement," Ramos said. "We have a dream, this goal to do something big. A new quest starts, a new objective, and there is no better way to do so than this."

Spain dominated the first half at Valencia's Mestalla Stadium but only Rodrigo Moreno could convert his scoring chance.

Norway equalized in the 65th minute when forward Joshua King netted a penalty kick after substitute Bjorn Johnsen was fouled by Inigo Martinez in the area.

But Ramos soon got his turn at the spot when Alvaro Morata poached a poor back pass by Harvard Nordtveit and was cut down in the box by goalkeeper Rune Jarstein.

Ramos, making his 162nd appearance for Spain, got the winner when he converted a spot kick in the "panenka" style — waiting for the goalie to move before chipping the ball down the middle — in the 71st.

Also in Group F, Sweden beat Romania 2-1 thanks to goals by Robin Quaison and Viktor Claesson. Substitute Claudiu Keseru pulled one back for Romania.

Malta edged the Faroe Islands 2-1 in the matchup of the group's minnows.

Three-time champion Spain is the favorite to win the qualifying group.

Barella, a 22-year-old midfielder with Cagliari, scored seven minutes in for Italy with a long, deflected shot from a rebound following a free kick from Marco Verratti.

Kean, aged 19, then took advantage of an excellent throughball from Ciro Immobile to find the target from the center of the area in the 74th. He became the second youngest scorer for Italy after Bruno Nicole in 1958.

"He's skillful," Italy coach Roberto Mancini said of Kean. "But he still has a lot of work to do. He's got a huge margin for improvement."

It marked the first time the Azzurri scored more than one goal in a competitive match in nearly two years.

Also in Group J, Greece won at Liechtenstein 2-0 from goals by Kostas Fortounis and Anastasios Donis.

Switzerland got second-half goals from Steven Zuber and Denis Zakaria to win at Georgia 2-0, ending the hosts' run of seven unbeaten games at home.