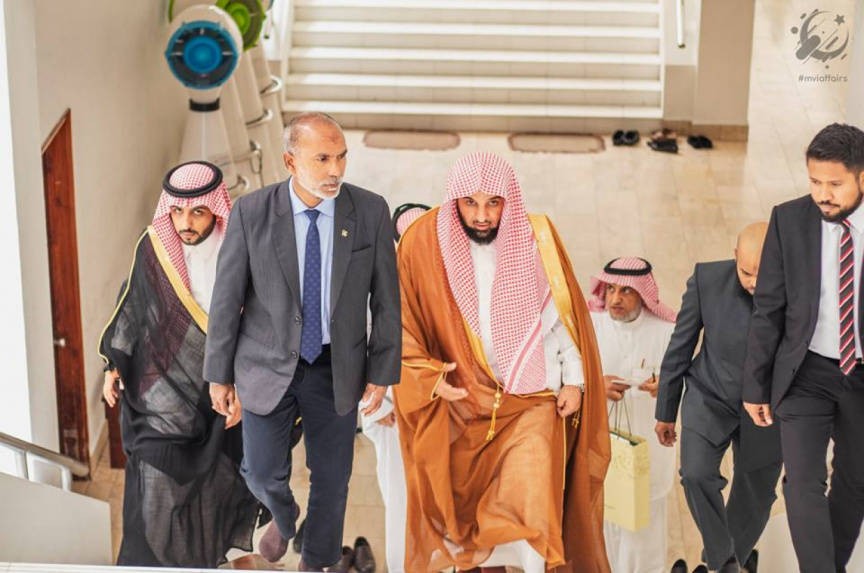 A high-level delegation from the Ministry of Islamic Affairs of Saudi Arabia have made a visit to inspect the construction of the King Salman Mosque in Male’ City.

King Salman Mosque – named in honor of King Salman bin Abdulaziz Al Saud – is being built in the East of Male’ City.

Saudi government has donated USD 95 million in non-reimbursable financial aid to the Maldivian government to build the 10,000-worshipper mosque – which once completed – will be the largest mosque in Maldives.

The six-floor mosque, in order to accommodating 10,000 worshippers at once, will also have a multi-purpose hall and a library.

The delegates were escorted by Minister of Islamic Affairs of Maldives, Dr. Ahmed Zahir.

Structure work of the King Salman Mosque is now complete and contractors are currently working on building the roof over the building.

The delegation from Saudi government, during its current visit, has signed a Memorandum of Understanding for Cooperation in Islamic Affairs and Unity with the Maldivian government.

The MoU was signed on behalf of Saudi Arabia by Dr. Abdulla Muhammed Al Samel and on behalf of the Maldivian government by State Minister for Islamic Affairs, Ilyas Jamal on March 1.

The delegation has also toured the Islamic Center during which Dr. Abdulla Muhammed Al Samel interacted with worshippers and students.