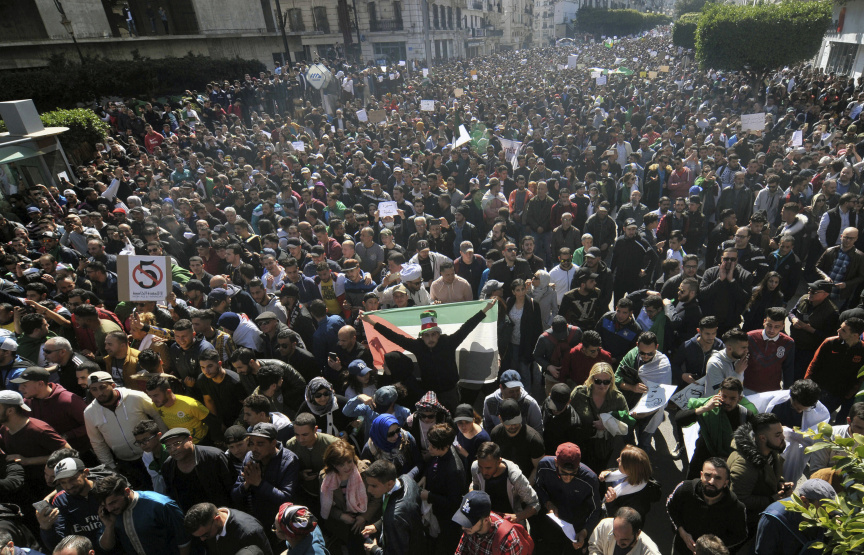 ALGIERS, Algeria (AP) — Masses of Algerians surged through the capital and rallied in other cities Friday against ailing President Abdelaziz Bouteflika's bid for a fifth term, in an exceptional popular challenge to the country's secretive leadership.

Protesters surged past a barricade and defied repeated volleys of tear gas fired by police in the march in Algiers. Most marchers were peaceful but a small group throwing stones clashed at the end of the event with police, causing some injuries.

Such anti-government protests are unusual in Algeria, where questions are growing about Bouteflika's fitness for office after a 2013 stroke that has left him largely hidden from public.

Police helicopters circled overhead as crowds gathered in streets and parks of Algiers after midday Muslim prayer services to join the march. Organizers of the social media-driven movement hope the protest will send a loud signal of public discontent to Algeria's secretive leadership before the April 18 presidential election.

"For a free and democratic Algeria!" shouted some demonstrators, or "No fifth term!"

Bursts of tear gas fire punctuated the afternoon, starting soon after crowds started gathering. More and more demonstrators joined in as the group marched along a route parallel to the city's Mediterranean shore.

Police stopped the crowd near the central post office, and the protesters' chants briefly fell silent as they joined together to sing the Algerian national anthem.

Then the crowd overwhelmed a police barricade, pushing on toward Martyrs' Square in the historic Casbah neighborhood.

Associated Press reporters saw tens of thousands at the heart of the Algiers protest, while Algerian media and organizers reported several hundred thousand at protests nationwide, calling it the biggest such action in more than a decade.

As the Algiers protest wound down, groups of young demonstrators cleared away bottles and other garbage left along the protest route, heeding a call by organizers to stay peaceful and respectful.

It's the latest of several protests in recent days against Bouteflika's candidacy for the April 18 election. The protests have been largely organized by a movement called Mouwatana, or citizenship, that gathers various opposition parties and activists and wants Bouteflika to renounce his decision to seek a new term.

The crowds Friday weren't targeting anger just at Bouteflika but at those around him who have kept the president, and themselves, in power for so long despite his difficulties in moving and speaking. They feel Algeria's leadership has neglected unemployment, corruption and poverty eating away at society.

"All the (current political) system must leave and change. I'm not only talking about Bouteflika. I'm talking about the system in general. It needs to change and then we will build a new state," protester Sid Ali said.

Demonstrators didn't express support for a single challenger in the election, though opposition candidate Ali Benflis expressed support Friday for the march, calling Bouteflika's presidential bid a "humiliation for the Algerian people."

Among those protesting were a woman active in Algeria's war against French colonial rule a half century ago and the head of one of Algeria's biggest companies, according to local media.

"All of society is here," he told The Associated Press. "The powers-that-be should make some conclusions starting tonight."

While a record number of would-be candidates want to challenge Bouteflika, many voters see no clear alternative to his rule.

Bouteflika is credited with reconciling Algerians after a decade of civil war between Islamic insurgents and security forces that left some 200,000 people dead. He has been in power since 1999 and overwhelmingly won re-election in 2014, and most Algerians will likely vote for him again next month for fear of instability that his departure could unleash.

State media has largely ignored the protests, and on Friday repeated extracts from a speech the day before by Prime Minister Ahmed Ouyahia, in which he offered support for peaceful demonstrations but warned against "manipulation by parties that want to destabilize Algeria."

Bouteflika himself, who is 81, is undergoing medical checks in Switzerland.

Geneva daily Tribune de Geneve reported Thursday that Bouteflika was receiving medical treatment at Geneva University Hospitals. Hospital spokesman Nicolas de Saussure told The AP that the hospital does not communicate information about its patients out of privacy concerns.