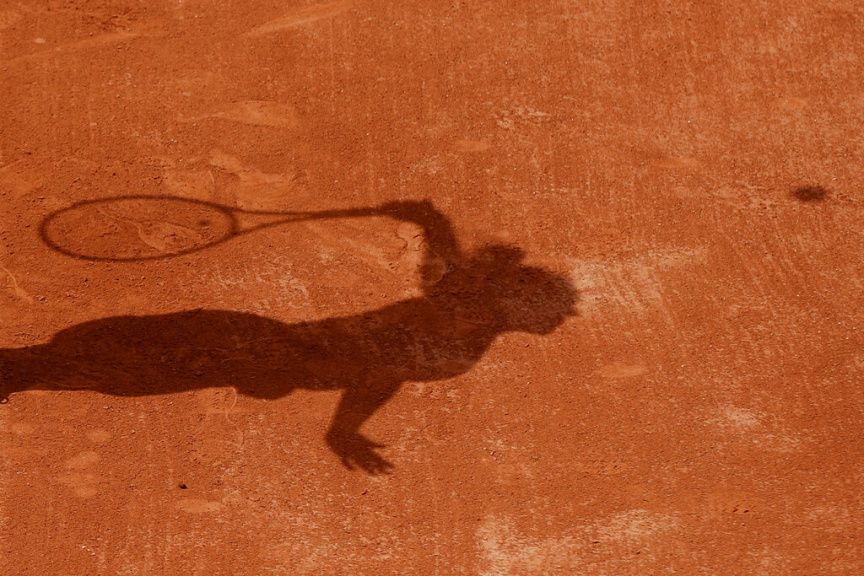 FILE - In this Tuesday, May 30, 2017 file photo a tennis player casts a shadow on the clay as they serve during a tennis match at the French Open tennis tournament at the Roland Garros stadium in Paris. Four people are in French custody on suspicion of fixing matches for an Armenian based in Belgium believed behind an illegal gambling syndicate suspected of fixing hundreds of matches. (AP Photo/Petr David Josek, File)

PARIS (AP) — The crooked tennis players knew him as "Maestro." To European investigators, the Armenian based in Belgium is emerging as something else: The suspected ringleader of an organized gambling syndicate suspected of fixing hundreds of matches and corrupting more than 100 players from around Europe.

As Roger Federer and other stars at the top of tennis compete in the Australian Open, players far lower down the sport's food chain are being questioned this week by police in France on suspicion of fixing matches for the Maestro, himself in detention in Belgium.

The picture emerging from months of digging by police working across Europe is of a massive match-fixing scheme, organized via encrypted messaging, involving dozens of low-ranked players in small tournaments with little prize money. Police say Maestro employed mules, people hired for a few euros (dollars) to place bets for the syndicate that were small enough to slip under the radar of gambling watchdogs.

Sources close to the investigation, all speaking on condition of anonymity because they weren't authorized to discuss details publicly, said four French players were in police custody on Wednesday and at least one of them told investigators that he fixed around two dozen matches for Maestro.

They named the players as Jules Okala, 21; Mick Lescure, 25; Yannick Thivant, 31; and Jerome Inzerillo, 28. None operated in the highest spheres of tennis. The career-best singles ranking of any of them was 354, reached by Inzerillo in 2012. The arrests of Okala and Lescure were first reported Wednesday by French sports newspaper L'Equipe.

A dozen or more other French players are expected to be questioned in coming days or weeks. An investigator said France was one of the countries "hardest hit" by the syndicate, which targeted lower-level pro tournaments. Okala and Lescure were detained before they were to play in a modest tournament in Bressuire, western France, this week that offers a total of $15,000 in prize money.

Investigators have also questioned players in Belgium, the Netherlands, Germany, Slovakia, and Bulgaria and are looking to question others, including both players and managers, in the United States, Chile and Egypt.

"The impression we're getting is that it is very commonplace," one official told The Associated Press. Another said several hundred matches are thought to have been fixed.

Investigators fear that players used by the syndicate could suck others into the scheme and could go on to infect bigger tournaments if they climb higher in the rankings.

"In time, they could be managers of other new players or trainers so we have to get them out of the system or they could corrupt others in a few years," one official told The Associated Press.

Maestro, the syndicate's 28-year-old alleged ringleader, was swept up in a wave of arrests in Belgium last June and remains in custody, facing organized crime, match fixing, money laundering and forgery charges. A suspected banker for the syndicate also faces money laundering and organized crime charges, while four others are being investigated for illegal gambling and finding mules, who are thought to have been paid for placing modest bets for the syndicate on matches that it fixed.

Because the bets were small, the risk of detection was "almost zero," but the profits could still be considerable if many bets were placed, one official said.

Still unclear is whether the Belgium-based syndicate was linked to another match-fixing and gambling operation, also involving Armenians, unraveled in Spain . Spanish police last week announced that 28 professional tennis players, including one who participated in last year's U.S. Open, were linked to that ring, taking bribes to fix results that the group bet on using fake identities.