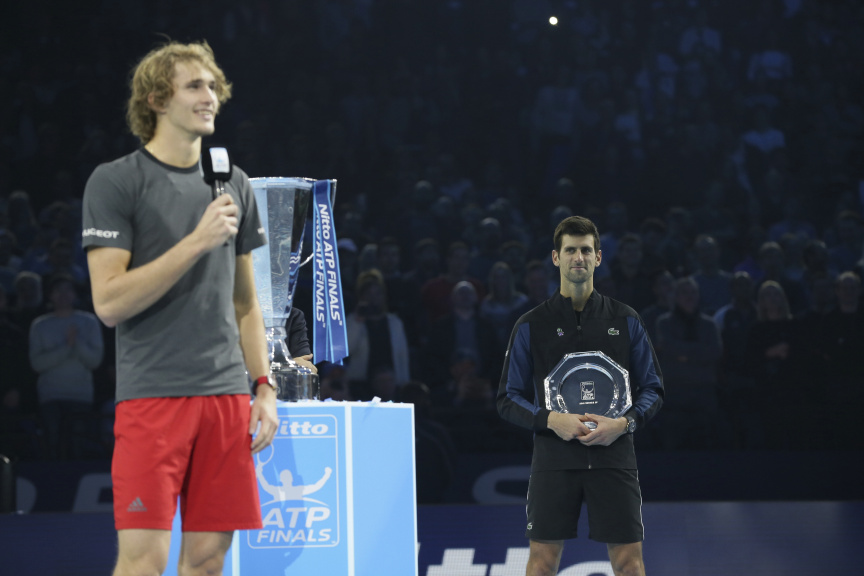 LONDON (AP) — Despite beating Novak Djokovic in straight sets to win the ATP Finals at only 21, Alexander Zverev knows keeping pace with the Serb isn't going to be easy.

Zverev claimed the biggest title of his career with a 6-4, 6-3 upset on Sunday, becoming the youngest champion of the season-ending event since Djokovic claimed the first of his five titles a decade ago — also at age 21.

Top-ranked Djokovic was attempting to tie Roger Federer's record of six titles but followed the same path as the Swiss great, who lost to Zverev in the semifinals at the O2 Arena.

Djokovic's serve hadn't been broken all tournament until the final. Zverev did it once in the first set and three times in the second, completing the victory with a spectacular backhand winner up the line.

"There's a lot of similarities in terms of trajectory ... in our careers," said Djokovic, who ended a two-year Grand Slam title drought by winning Wimbledon this year, before going on to claim his 14th major trophy at the U.S. Open. "Hopefully he (Zverev) can surpass me."

Both players began the match in the same form that had seen them earn straight-sets semifinal victories a day earlier, with few points going against the server.

It was Djokovic, who had lost just two of his previous 37 matches and defeated Zverev in the round robin, who began to feel the pressure as consecutive forehand errors gave up his first break of the tournament for 5-4.

Fans gave Zverev a huge ovation as he stepped up to serve for the set, and it appeared to inspire him. Three straight aces brought up three set points, the second of which he took when Djokovic sent another forehand long.

"I was making way too many unforced errors," Djokovic said. "From 4-4 in the first set, my game really fell apart."

Zverev even began to win the longer rallies, an area of the game that Djokovic usually dominates. A 26-shot duel brought up another break point in the opening game of the second set and, although Djokovic saved it, Zverev won another lengthy exchange moments later with a forehand winner to go 1-0 up.

With the biggest win of his career in sight, Zverev began to show some nerves. Although he is the only active male player outside of the Big Four of Djokovic, Federer, Rafael Nadal and Andy Murray to possess three or more Masters titles, the young German has only reached one Grand Slam quarterfinal.

Two double faults and two backhand errors gifted Djokovic an immediate break back, but Zverev quickly refocused to win a 28-shot rally on his way to breaking in the following game.

"I lost my serve once against him today," Zverev said. "I think this is a pretty good stat, especially as he's the best returner we have in the game."

From there he remained solid on serve, before ending with a flourish. A backhand winner on the run drifted past the helpless Djokovic and Zverev sunk to the ground in tears.

"This trophy means a lot, everything," Zverev said. "You only have so many chances of winning it. You play against the best players only."

Djokovic sportingly crossed the net to embrace the player who will now be considered among the favorites in Australia in two months' time to end the Serb's run of two consecutive Grand Slam victories.

"I've had most success in my career in Australia," said Djokovic, who has won six times in Melbourne. "Hopefully I can keep that going."

Having failed to take advantage of five championship points during the first-to-10 match tiebreaker, Bryan and Sock then had to save one against their French opponents before finally closing out victory.

The 40-year-old Bryan has now won the tournament five times. He won four times with his usual partner — and brother — Bob, who has been out with an injured hip since May.

Sock and Bryan have dominated since teaming up, winning Wimbledon and the U.S. Open before finishing their season in style in London.

"It's been a hell of a ride," Bryan said. "This could be our last hoorah because Bob's training back in Florida."