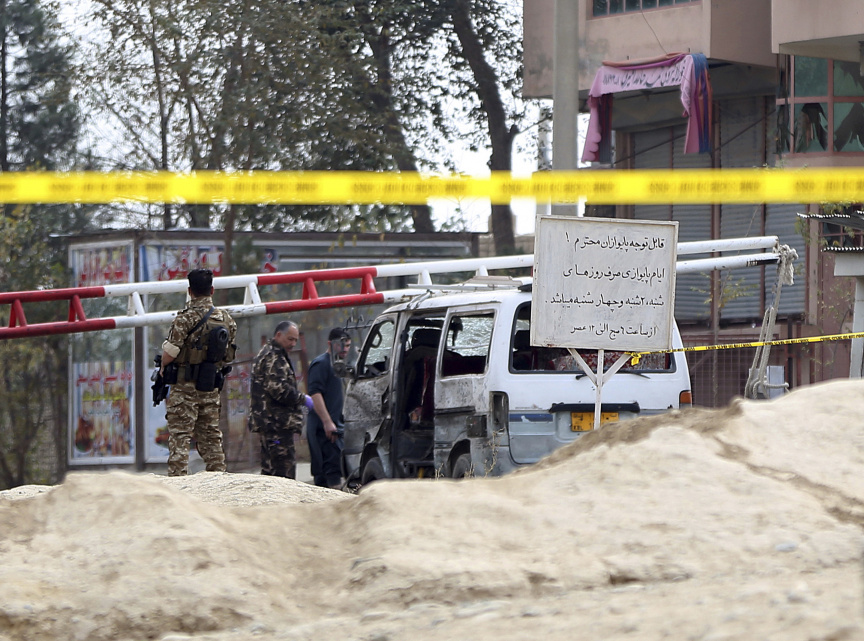 Security forces inspect the vehicle damaged by a suicide attack in Kabul, Afghanistan, Wednesday, Oct. 31, 2018. An Interior Ministry official says the suicide bomber has struck outside the country's largest prison on the eastern edge of the capital Kabul. (AP Photo/Massoud Hossaini)

KABUL, Afghanistan (AP) — An Afghan army helicopter crashed Wednesday in bad weather in the western Farah province, killing all 25 people on board, including the deputy corps commander of the western zone, a provincial spokesman said.

Mohammad Naser Mehri, spokesman for the Farah governor, said the helicopter crashed around 9:10 a.m. (0440 GMT), shortly after taking off from the mountainous Anar Dara district heading toward the nearby Herat province.

On board were the corps commander, Gen. Naimudullah Khalil, and two members of the Farah provincial council, its chairman, Farid Bakhtawar, and Jamila Amini, one of only two women on the nine-member council.

Wednesday's was the second army helicopter crash in as many months in Farah. In September, five crew members died when their helicopter crashed. Investigators blamed the crash on a technical failure, without elaborating.

Abadullah Karimi, a prison official, said the attack occurred near the prison gate where visitors were waiting to pass a rigorous security check before entering.

No one has claimed responsibility for the attack.