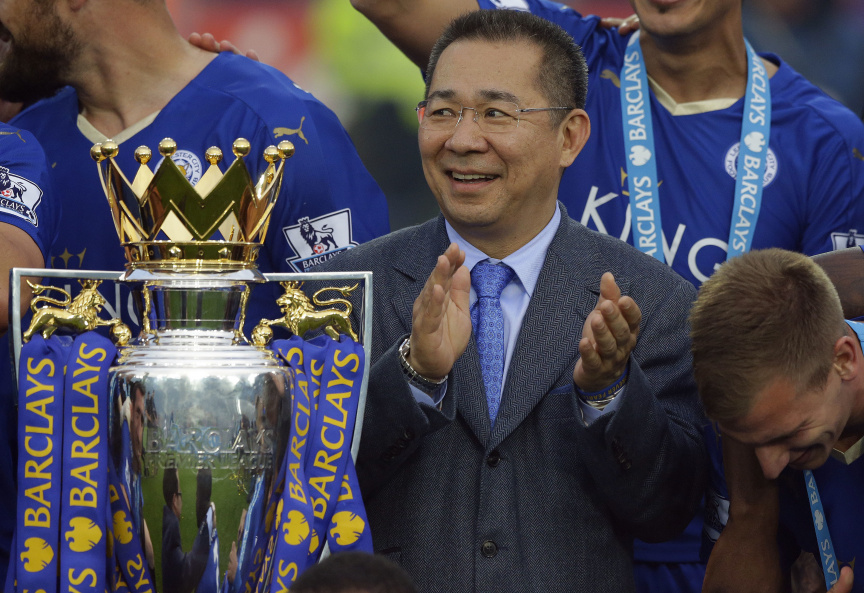 Bankrolling Leicester City but without the lavish spending of the bigger clubs, the Thai billionaire oversaw one of the greatest underdog successes in sports when the 5,000-1 outsiders won soccer's richest competition in 2016.

In an era of often-absentee foreign owners in the Premier League, Vichai also broke the mold by forging close ties with supporters and the local community.

While Vichai did not seek the limelight and was far from flamboyant, the wealthy entrepreneur's grandiose mode of transport from the King Power stadium named after his duty-free empire became symbolic of the club's newfound status in the game. A helicopter would land on the field after matches and whisk away the owner.

Saturday night was the last journey for Vichai.

Goalkeeper Kasper Schmeichel was seen weeping as he stared at a fireball in a carpark outside the stadium around an hour after a 1-1 draw with West Ham. Moments earlier, the AgustaWestland AW169 had risen from the center circle and cleared the stadium roof before it spiraled out of control and plummeted into an adjacent carpark in flames.

The 60-year-old Vichai and the four other people on board did not survive the inferno, Leicester announced Sunday.

"I am so totally devastated. I just cannot believe what I saw last night," Schmeichel said. In an emotional tribute to Vichai, the seven-year veteran of the club said: "You changed football. Forever. You gave hope to everyone that the impossible was possible, not just to our fans but to fans all over the world in any sport."

On the spot where fans danced into the night after the improbable title victory two years ago, people gathered through the day to mourn. Hours before the Sunday night confirmation that Vichai did not survive the crash, scarves, jerseys and flowers were laid in an ever-expanding memorial in front of the stadium.

"Without you," read one message on a club flag, "the dream wouldn't have become reality."

Leicester's next game, which had been scheduled for Tuesday against Southampton in the League Cup, has been postponed.

"We now have a responsibility as a club, as players and fans to honor you," Schmeichel said.

Two members of Vichai's staff, Nursara Suknamai and Kaveporn Punpare, also died along with pilot Eric Swaffer and passenger Izabela Roza Lechowicz. Fears that family members were on board were allayed through the day, with his Vichai's son, Aiyawatt, now in line to step up from his role as vice chairman.

"The world has lost a great man," the Leicester club said in a statement. "A man of kindness, of generosity and a man whose life was defined by the love he devoted to his family and those he so successfully led."

Vichai, who started with one shop and grew Thailand's massive King Power duty-free chain, bought Leicester for 39 million pounds ($50 million) in 2010 when it was in the second-tier competition. Avoiding relegation in its first season back in the Premier League was remarkable enough in 2015 after spending much time in last place. But that was eclipsed in 2016 by the team winning the top-flight title for the first time since being founded in 1884.

"It is a spirit that has spread beyond Leicester, taking our story to the hearts of the world. Our spirit exists because of the love we share for each other and the energy it helps to create, both on and off the pitch, and in the years to come, it will continue to be our greatest asset."

Vichai was ridiculed for hiring the manager who masterminded the title success. Claudio Ranieri had been out of work since being fired by the weak Greece national team and his only job in the Premier League at Chelsea ended 11 years earlier. But it proved to be an inspired recruitment, helping to turn a humdrum group of journeymen and modestly purchased signings into a lineup that overpowered the mega-rich giants of the Premier League.

"That was a dream," life-long supporter Ian Hubber said outside the stadium on Sunday. "This is a nightmare."

The outpouring of emotion at the stadium on Sunday reflected how highly the ownership is regarded in the city, which has only one professional soccer team. Vichai has formed a close bond with the fans, sometimes mingling with them at games.

Vichai has been praised for his charity work, donating 2 million pounds ($2.5 million) toward a new local children's hospital, and he often provided free beer and food for fans outside games.

"He's an owner who actually cared about a club," 19-year-old fan Rikesh Vaja said. "It's not just the club. He impacted the entire city."

He also gained for the club new fans in Thailand, where they mourned Vichai's sudden death.

"It's Thailand's team," soccer fan Chatworachet Sae-Kow said in Bangkok. "It brought fame to Thailand when they won (the title). He carried the Thai flag with him and made people know more about Thailand."