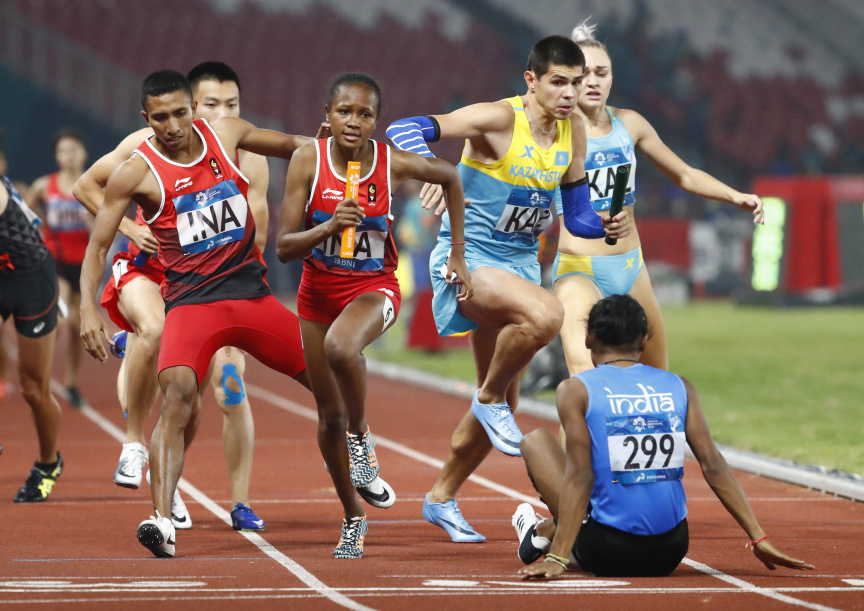 India's Hima Das sits on the track as athletes look to run around her during the w4x400m mixed relay final during the athletics competition at the 18th Asian Games in Jakarta, Indonesia, Tuesday, Aug. 28, 2018. (AP Photo/Bernat Armangue)

JAKARTA, Indonesia (AP) — The 4x400-meter mixed relay made its debut at the Asian Games, with Bahrain winning the first gold medal and three runners narrowly avoiding a collision when India's Hima Das dropped on the track at the last baton exchange.

The international athletics federation is experimenting with new events and the mixed 4x400, with each team comprising two female and two male runners, was a hit at the World Relays in the Bahamas last year and in the exhibition Nitro series.

It is slated for inclusion in the 2020 Tokyo Olympics, so teams at the Asian Games took it seriously.

Kazakhstan's last runner had to side-step Das, the world junior women's 400 champion, as she sat on the track in the hand-over zone.

There's no set order of runners, so tactics play a big part. Tuesday's race started with four teams leading off with the men, and four with women.

Not surprisingly, the four teams who led off with men set the early pace, including Bahrain and India.

All but one team had men running the anchor legs. The only one that didn't — host Indonesia — slipped from the middle of the pack to last place on the last lap.

Despite missing a medal in the relay, China returned to the top of the track and field standings after trailing Bahrain for two days.

China has nine gold medals and 20 overall in athletics after four days, one more gold than Bahrain and four more overall.

India is next with three gold medals and 11 in total, helped by Majit Singh leading a surprising 1-2 finish in the men's 800 when he won in 1 minute, 46.15 seconds from teammate Jinson Johnson.

For China, Li Ling defended her pole vault title with a games record of 4.60 meters, but was unable to beat her own continental record as she missed at 4.71.