No 1s Tai and Axelsen lose in world badminton quarterfinals 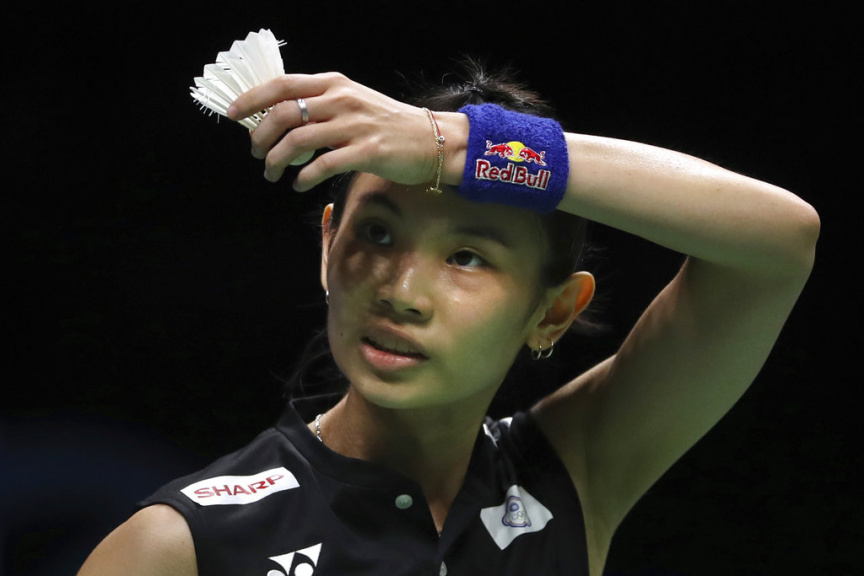 Tai Tzu-ying of Taiwan reacts as she competes against He Bingjiao of China in their women's badminton singles quarterfinal match at the BWF World Championships in Nanjing, China, Friday, Aug. 3, 2018. (AP Photo/Mark Schiefelbein)

NANJING, China (AP) — No. 1s Tai Tzu Ying and Viktor Axelsen were knocked out in the quarterfinals of the badminton world championships on Friday.

Tai's defeat was the biggest surprise, as the Taiwanese lost for only the second time this year in 37 matches.

She was beaten by He Bingjiao of China 21-18, 7-21, 21-13. After dropping the first game, Tai stormed back in the second, but was unable to maintain her momentum in the third.

The win represented payback of sorts for He, who lost to Tai in the Malaysia Open final in June and the Indonesia Open semifinals last month. She's through to her first worlds semifinal.

Tai, yet to win the worlds, lost in the quarterfinals at her fourth straight worlds.

Axelsen committed multiple unforced errors and struggled to find a rhythm as he allowed Chen to dictate the pace and find his spots.

"I stuck with my tactics no matter how my opponent was doing - taking a lead or falling behind," Chen said. "I firmly believed that I could go all out to win this match."

Shi was down 15-7 in the third game before ripping off 14 of the next 17 points to complete the comeback.

Chen holds a 4-1 career advantage over Shi, but lost their last meeting in the All England quarterfinals, a tournament Shi went on to win.

To reach the final again, third-seeded Sindhu will have to go through another Japanese, second-seeded Akane Yamaguchi.

Yamaguchi gained her own revenge against Chen Yufei, who knocked out the Japanese star in the third round last year at her first worlds. Yamaguchi won the rematch 21-13, 17-21, 21-16 in 68 minutes. She is a former two-time junior world champion who became in April the first Japanese male or female to rank No. 1.

The reward for Tai's conqueror He was to face former two-time champion Carolina Marin of Spain, who dominated last year's bronze medalist, Saina Nehwal of India, 21-6, 21-11.

On the men's side, the unseeded Darin Liew, who trains independently of the Malaysia team, reached the semifinals, his first at the worlds at age 30 and his first anywhere since January. Liew beat Kanta Tsuneyama of Japan 22-20, 21-23, 22-20, after blowing three match points in the second game.

Momota missed the Rio de Janeiro Olympics through suspension after admitting to illegal gambling, and showed he's back in April when he won the Asian Championships beating Chen in the final.