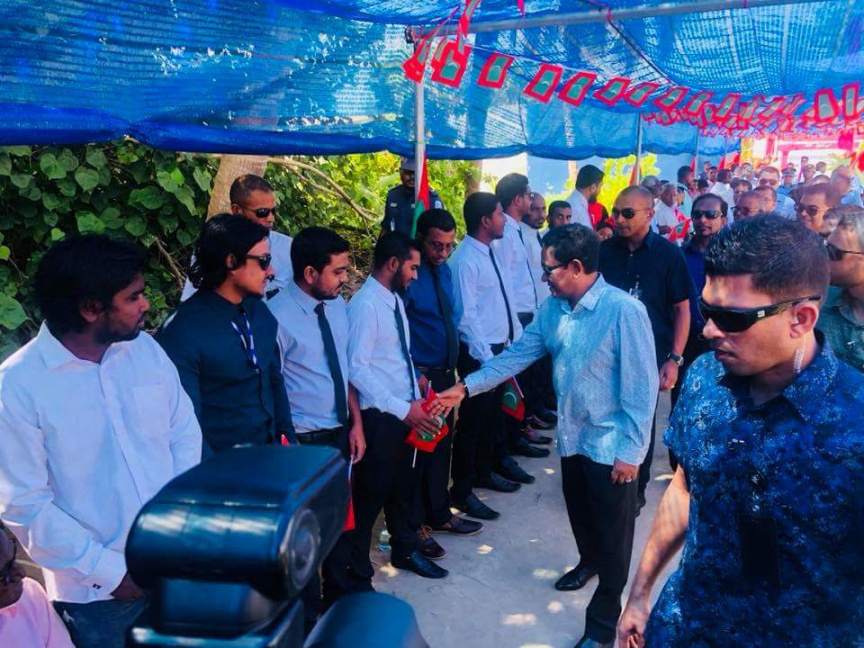 President Abdulla Yameen Abdul Gayoom arrives in Sh. Bileffahi as part of a two-day tour of islands in Sh. Atoll on July 2, 2018. (Photo/Twitter)

Sh. Bileffahi marked the completion of the coastal protection project on the island this Monday morning.

President Abdulla Yameen Abdul Gayoom, who is on a two-day tour of Sh. Atoll, participated in the function.

Bileffahi has been affected by beach erosion for years.

The coastal protection project for Bileffahi was allocated in the State budget in 2015.

The project was contracted Capital Investment and Finance Private Limited. It began on September 13, 2015 and was completed on December 10, 2016.

25,738 square meters of sand was poured into the affected area, and a 520-meter revetment wall built around the coast as part of the project.

The Ministry of Environment and Energy reports that the coastal protection system used in Bileffahi was selected after extensive research, and that it is the system most suitable for the Maldivian environment.

The Maldivian government has spent MVR 1.34 billion over the past three years to run coastal protection projects in 32 Maldivian islands.

President announces plans for an airport in Bileffahi

President announces plans for an airport in Bileffahi