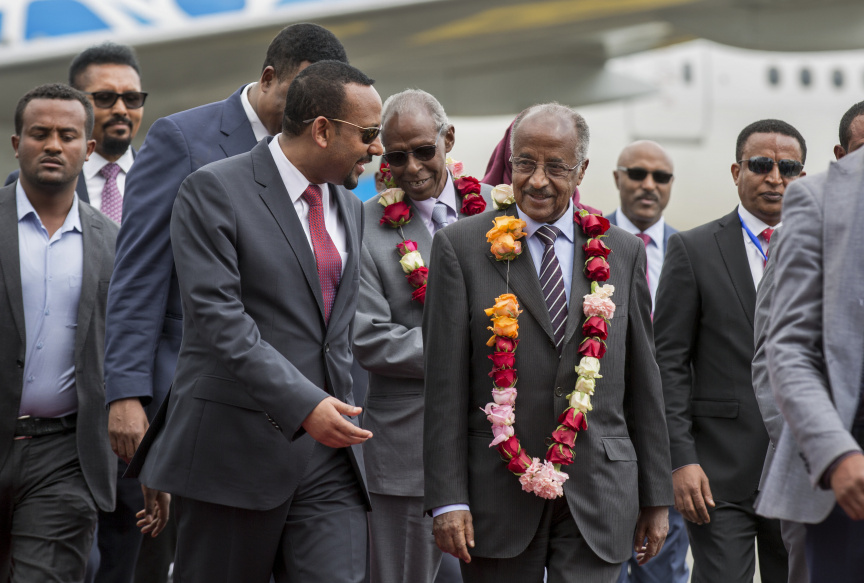 ADDIS ABABA, Ethiopia (AP) — Ethiopia on Tuesday welcomed the first delegation of top officials from longtime rival Eritrea for the first time in two decades for peace talks, with Ethiopia's prime minister declaring that the separation between the neighbors "is shattered down."

"We have tried war and found it useless," Prime Minister Abiy Ahmed told a dinner reception at the National Palace for Eritrea's foreign minister and others, after a day that began with draping the visitors on arrival at the Addis Ababa airport with strings of flowers. The two countries have not had diplomatic relations since a border war broke out in 1998.

"We want our brothers and sisters to come here and visit us as soon as possible," Abiy added, saying the two countries will celebrate the upcoming Sept. 11 new year together and that Ethiopian Airlines "soon" will start flights to Eritrea's port city of Massawa.

"This is the time for reconciliation and love," the prime minister said.

The delegation from Eritrea, one of the world's most reclusive countries, led by Foreign Minister Osman Sale came after a surprising exchange of goodwill that began early this month with a gesture to end one of Africa's longest-running conflicts.

Ethiopia's reformist new prime minister, who took power in April, announced that his country would fully accept a 2000 peace deal ending the border war that had killed tens of thousands of people.

Although outright fighting stopped, the two countries have skirmished a number of times in recent years and the peace agreement has not been implemented. Ethiopia had refused to accept the terms that gave Eritrea control of key locations, including the city of Badme, which Ethiopia continues to control.

Days after Ethiopia's announcement, Eritrea's longtime President Isaias Afwerki noted the "positive signals" and announced he would send a delegation to "gauge current developments directly and in depth" and plan future steps.

In a sign of the new effort at dialogue between the rivals, at least one Eritrean diplomat, its ambassador to Japan, publicly condemned Saturday's grenade attack on a huge rally in Addis Ababa shortly after Abiy addressed the crowd.

Two people died and more than 150 were hurt in the blast, while Ethiopia's ruling party blamed "desperate anti-peace elements" and vowed to continue with sweeping political and economic reforms in Africa's second most populous country.