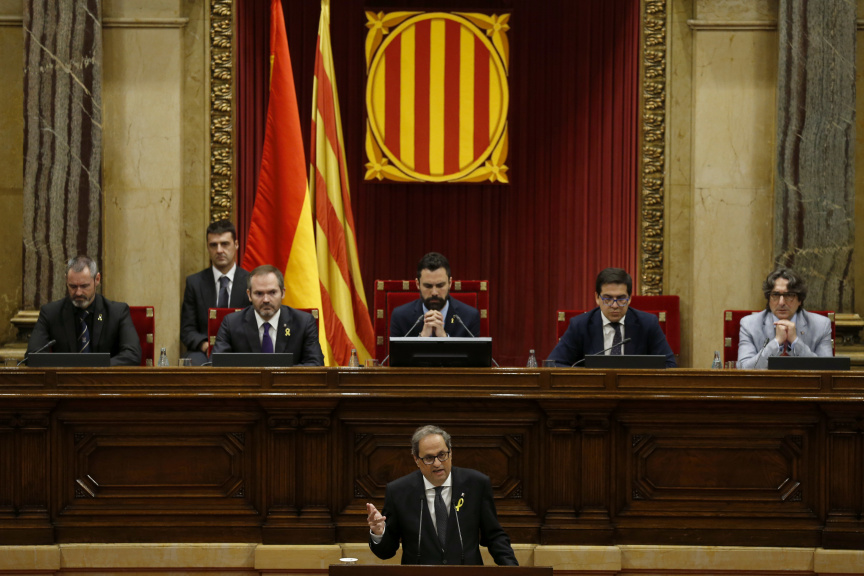 MADRID (AP) — Lawmakers in Catalonia elected a fervent separatist as the new chief of the restive region Monday, ending a leadership vacuum of more than six months and setting the scene for more confrontations with the Spanish government.

Quim Torra, a former corporate lawyer who went on to lead a prominent pro-secession group, vowed to build an independent Catalan republic by working under the leadership of his fugitive predecessor, Carles Puigdemont.

Puigdemont is in Germany fighting extradition to Spain, where he is wanted for allegedly using public funds and orchestrating an "insurrection" to get the wealthy northeastern region around Barcelona to break away from Spain.

Torra was elected 66-65 in a second round vote after he failed to secure an absolute majority in the 135-strong Catalan Parliament over the weekend. Four lawmakers with the far-left anti-establishment CUP party abstained.

Separatist parties won a slim majority in a December regional parliamentary election. They faced a hard deadline next week to either form a new government in Catalonia or have another election called.

Immediately after winning the vote, Torra said one of the goals of his new government would be to reinstate Puigdemont as "the legitimate president" of Catalonia. The Spanish government removed Puigdemont and his Cabinet from office after the regional parliament passed an illegal declaration of independence in October.

"Our president is Carles Puigdemont, and we will be faithful to the mandate of October...to build an independent state in the form of a republic," Torra, 55, told the chamber based in Barcelona.

Torra also has promised to create a "state council in exile" and vowed to establish a constituent assembly to write the constitution for a new Catalan republic.

"Everybody will win rights with the republic," Torra told fellow lawmakers in a speech before the vote. "Nobody will lose rights. The republic is for everybody, no matter what they vote."

The Catalan separatist movement has caused the worst political and institutional crisis in Spain in decades.

Central authorities have been ruling Catalonia directly from Madrid since the regional government led by Puigdemont relied on the results of an outlawed Oct. 1 referendum to declare unilateral independence from Spain.

The national government has fired dozens of civil servants and closed a network of overseas offices that sought investments in Catalonia but also functioned as "diplomatic delegations" to bolster support for independence.

The unprecedented Spanish takeover is set to end when Torra is sworn in along with a new Catalan Cabinet. But Spanish authorities have warned that the national government could reassert its authority if the new regional government breaks the law again.

Spanish Prime Minister Mariano Rajoy said he didn't like what he had heard during Monday's investiture debate in the Catalan assembly. He said his judgment on Torra's appointment will depend on Torra's actions.

"We will bet on understanding and agreement in looking at the future," Rajoy told reporters in Segovia. "But I say this, and I mean it: I will make sure that the law, the Spanish Constitution and the rest of the legal system, are obeyed."

Rivera, who is experiencing a wave of popularity in recent opinion polls that are placing his party ahead of the ruling Popular Party, has urged Rajoy to extend the takeover.

Polls show that Catalonia's 7.5 million residents are evenly divided on whether the region should secede from Spain. A great majority wants to settle the issue in a referendum, which under current law only the central government can set.

Torra was the fourth candidate put forward by the two main pro-independence parties. Spain's Constitutional Court suspended a law that would have allowed self-exiled leader Puigdemont to be considered in absentia.

A former regional minister became ineligible to serve when he was jailed for his role into last year's independence bid. A separatist activist also couldn't be elected because he wasn't allowed to leave prison.