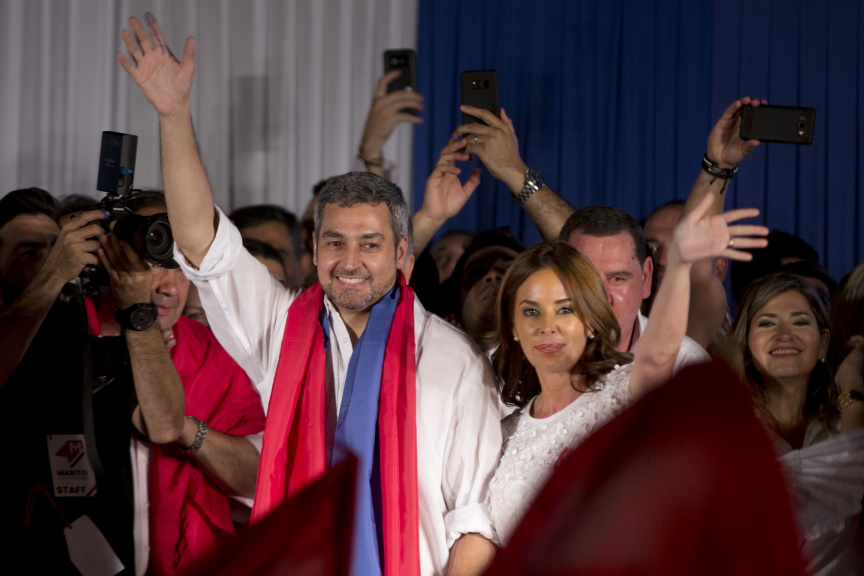 ASUNCION, Paraguay (AP) — The son of a former dictator's top aide won the presidential election in Paraguay on Sunday, helped by a booming economy under his party.

Mario Abdo Benitez of the governing Colorado Party had 46.5 percent of the votes, with 96 percent of 21, 000 polling stations reporting, electoral officials said. Efrain Alegre of the Authentic Radical Liberal Party finished second with 42.7 percent of the ballots. Eight other candidates finished far out of the running.

Both candidates are conservatives and the election was closer than the 20-point edge that opinion polls had given Abdo going into the election. Alegre, a 55-year-old lawyer who also finished second in the last presidential election, declined to concede, saying he would wait for the final count, though electoral officials said there were not enough ballots left to be counted to change the result.

Abdo, a 46-year-old marketing expert, campaigned on a promise to continue the business-friendly policies of outgoing President Horacio Cartes and he played down any fears of a return to the heavy-handed past of dictator Alfredo Stroessner, who ruled from 1954 to 1989. Abdo's father was Stroessner's private secretary.

After the results were announced, Abdo promised an "unwavering commitment" to being a good manager of the government.

"We built an electoral project with a dialogue of reconciliation and pardon among all Paraguayans," he said.

The top two candidates had similar platforms, promising to attract foreign investment to create jobs in an economy that has been one of the fastest-growing in the region but that still suffers from high poverty levels, extreme inequality and endemic corruption.

Both also are social conservatives who criticized sex education and abortion rights.

The Colorado Party has led Paraguay with only a few interruptions since the mid-20th Century. The landlocked nation of about 7 million people borders Argentina, Bolivia and Brazil.

Election officials reported no serious disturbances during the balloting, though a woman was detained for hitting Abdo in the shoulder while he was at the polling place. Police said her motive was unclear.

At least 75 flee from Paraguay prison