Tens of thousands protest in Slovakia at journalist's death 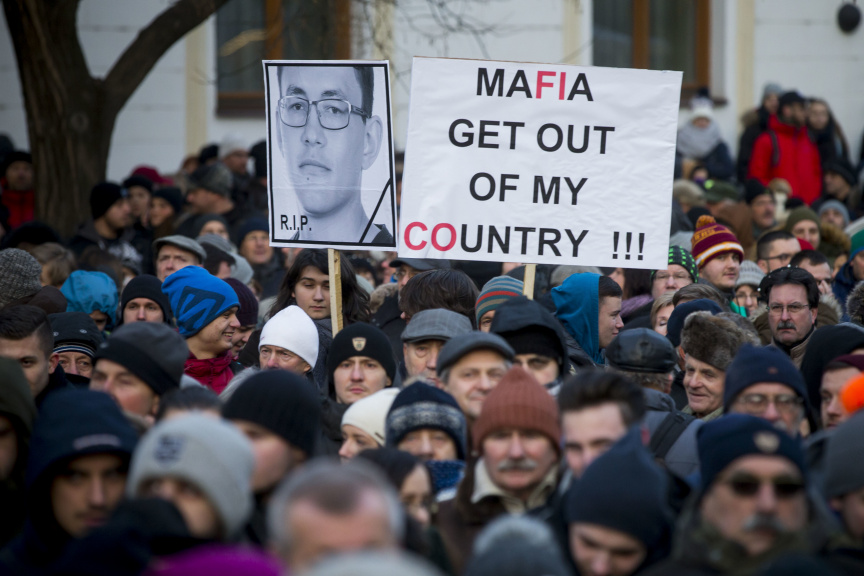 PRAGUE (AP) — Tens of thousands of Slovaks rallied in massive anti-government protests across the country on Friday to demand a thorough investigation of the slayings of an investigative reporter and his fiancee, and changes in government.

The protesters packed a central square in Bratislava and other rallies were taking place in dozens of other places in Slovakia as well as abroad, the biggest since the 1989 Velvet Revolution.

The organizers want foreign experts to join the team investigating the killings and the creation of "a new trustworthy government with no people who are suspected of corruption" or ties to organized crime.

Jan Kuciak's last, unfinished story was about the activities of Italian mafia in Slovakia and their ties to people close to Prime Minister Robert Fico, whose government is allegedly also linked to other corruption scandals.

"Slovakia is shaken as it has not been for a long time," organizer Karolina Farska said.

The peaceful protesters had a message for Fico: "Resign," they repeatedly chanted.

In the wake of the unprecedented slayings of Kuciak and Martina Kusnirova, Slovakia quickly turned from what seemed to be a stable European Union country into chaos.

In a speech last month, President Andrej Kiska talked about his country as "successful, proud and self-confident." On March 4, however, he said Slovakia faces a "serious political crisis" triggered by the shooting deaths. Police said Kuciak's killing was likely linked to his work.

The political storm has been intensifying daily since the bodies were found Feb. 25.

Amid heated exchanges between the ruling coalition and the opposition, claims by Fico of conspiracies against him, and his repeated verbal attacks on Kiska, a growing number of people have started to turn against the Fico government, threatening its very existence.

"Many have realized that the situation is becoming critical," said Michal Vasecka, an analyst from the Bratislava Policy Institute think tank. "A fight started to prevent Slovakia from becoming another Hungary, an autocracy controlled by a small group of oligarchs."

Reflecting the popular mood and growing protests, Kiska has called for substantial changes in the government or for an early election to resolve the crisis.

"There's a huge public distrust of the state," Kiska said. "And many don't trust law enforcement authorities ... This distrust is justified. We crossed the line, things went too far and there's no way back."

Fico fired back, accusing the president of destabilizing the country with help from Hungarian-American billionaire George Soros, whom Kiska met with privately in New York in September.

Soros dismissed Fico's suggestion he might have anything to do with the president's proposals and the anti-government protests.

Vasecka, the analyst, said Fico's conspiracy claims likely anger some people and contribute to their decision to join the protests because they hark back to the 1990s and the rule of authoritative Prime Minister Vladimir Meciar who led the country into international isolation. Meciar also targeted Soros.

"It reminds people of Meciar and also of communist rule. And a large part of society is very sensitive about it," Vasecka said.

U.S. Ambassador Adam Sterling said in a statement that "as Slovak society wrestles with the implications of this crime, we urge all parties to refrain from resorting to the use of conspiracy theories and disinformation."

A junior party in the ruling coalition is demanding the resignation of Interior Minister Robert Kalinak. Thousands already demanded Kalinak's resignation last year after he was linked to earlier corruption scandals.

Meanwhile, the opposition has requested a parliamentary no-confidence vote on the government, but a date has yet to be set.