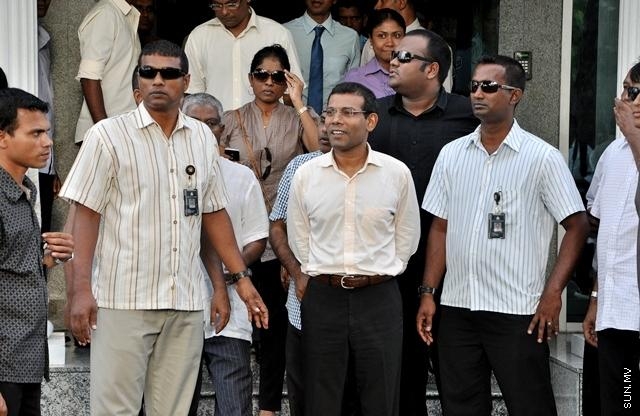 MDP supporters gathered near Nasheed’s residence Keneryge at around 13:30, to protest against Nasheed being summoned to Police at 14:00 today for the investigation of his phone call in which he was heard inciting violence against the Police.

Police had blocked several roads leading up to the Police station, but MDP supporters moved the barricades and marched past them. Objects were also thrown at the Police.

Finally at around 15:00, Nasheed entered the Police station along with Mariya Didi, Hassan Latheef, Hisaan Hussain and Raajje TV journalists.

Some confrontation took place between the Police and the crowd while Nasheed was in the Police station, leading to arrests.

Meanwhile, former Vice President of MDP Alhan Fahmy arrived in front of the Police station, and insisted that he wanted to confront Nasheed.

He was protesting against MDP for attacking him on the street, and assaulting his brother.

Nasheed spent about two hours at the Police station, and told reporters that he had answered the Police’s questions; but more information will be conveyed by his legal team.

He then walked towards Keneryge with his supporters.