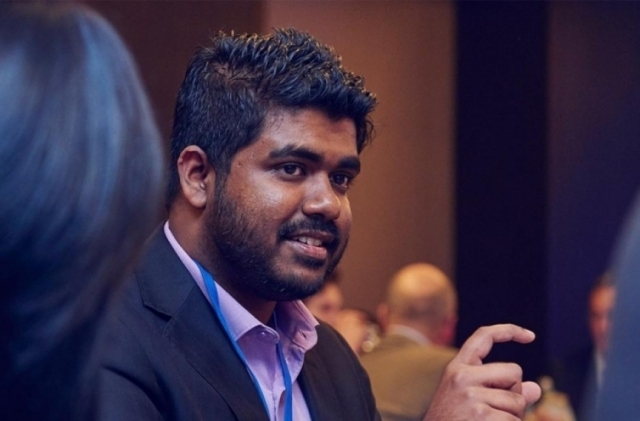 It has been over 24 hours since the brutal murder of human rights activist and blogger Yamin Rasheed, and there have been no report of any arrests in connection with the murder.

When asked if police have made any arrest in connection with the murder, police spokesperson Ahmed Shifan said this Monday morning that he “can’t make any comment at the moment”.

“Sun” is privy to information that no arrest has been made yet.

Police stated earlier that Yamin was murdered, and that the case is under investigation by Serious and Organized Crime Department.

29-year-old Yamin was found with multiple stab wounds – mainly to his head, neck and chest – on the stairwell of M. Spatula in Male’ City at 2:59 am on April 23.

He was alive when taken to Indhira Gandhi Memorial Hospital at 3:15 am, but died shortly afterwards and was pronounced dead at 3:48 am.

Yamin, who ran the popular blog page “The Daily Panic” was a close friend of missing journalist Ahmed Rilwan.

Former Maldivian leaders – Maumoon Abdul Gayoom, Mohamed Nasheed and Dr. Mohamed Waheed Hassan Manik have all expressed deep concern over Yamin’s muder and called out for an open and fair investigation into the case.

Meanwhile, Maldivian government released a statement in which it strongly condemned the murder which it described as a “heinous act”.

“This is a brutal and heinous act. We strongly condemned this act on behalf of Maldivian President and Maldivian government,” said the government in its statement.

“In his death we have lost a young, energetic, voice full of potential that contributed heavily, and responsibly, to the social and political discourse of our nation. He was a socially conscious, civic minded, talented, creative, courageous and impassioned young soul – everything the youth of this nation should aspire to be and more.”

The government vowed to utilize full use of all State resources to find justice for Yamin and his family.

Minister: Yamin’s killers will be found, with international help if necessary