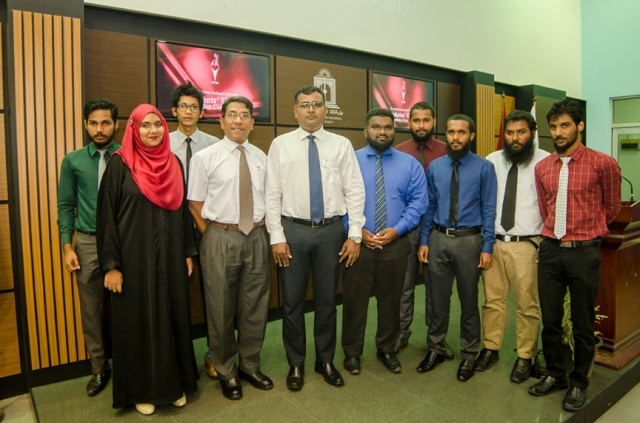 Students of Maldives National University elected as members of Exco of MNU Student’s Union have been awarded their credentials.

The credentials were handed over in a function held on Friday night by chief guest of the function, President of Bas Committee, Mohamed Nasheed (Colonel).

The Student’s Union won all university competitions held in 2016; including both women and men’s volleyball, basketball, and radio debate competitions.

Participants of the competitions and coaches of the teams were awarded certificates by Deputy Vice Chancellor of MNU, Aishath Shaheen during Friday’s function.

In his speech at the function, Colonel Nasheed commented that the university will not teach a student to become great, but that greatness can be achieved through the Student’s Union platform.

“Leaders of the nation are created through student union positions. President Sumuwwul Ameer Mohamed Ameen was such an example,” said Nasheed.

President of Student’s Union - both in 2016 and 2017, Ali Rasheed said the secret to success behind achievements in 2016 was dealing with all challenges head-on. And commended the literary and sporting teams, and coaches for their contribution.

Ali Rasheed said a great deal of attention would be given to MNU campuses in the atolls, this year.

“The biggest priority this year is to establish student union branches in atolls and decentralize them,” he said.

People and organizations who provided assistance to MNU were also awarded in the function.

162 grams of narcotics seized from Bangladesh man in airport