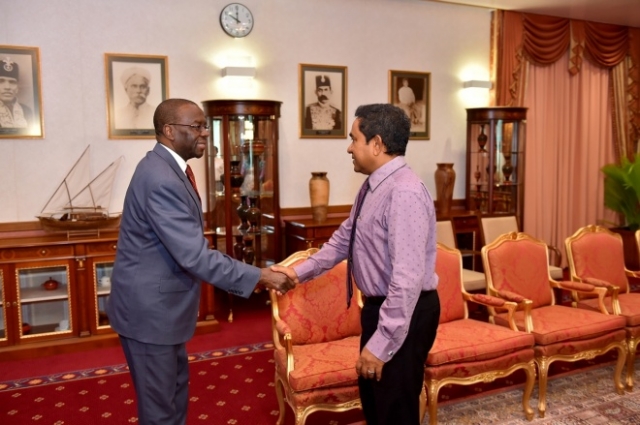 President Abdulla Yameen Abdul Gayoom has made the decision for the country to leave Commonwealth as per advise by his Cabinet.

The decision comes after the Cabinet meeting this Thursday, during which the Cabinet members advised the President to initiate the process to leave Commonwealth.

Statement announcing the decision to leave Commonwealth was read by Minister of Foreign Affairs, Dr. Mohamed Asim during the press conference held this Thursday evening at the President’s Office.

The statement read that it had been a difficult decision to make, but one which had been necessary in order to protect the independence and sovereignty of the country.

Maldivian government said that Commonwealth had consistently attempted to interfere in domestic affairs of the country, including its justice system since 2012 – the year of former

Government said the Commission of National Inquiry had found the sanctions imposed by Commonwealth in February, 2012, unfair.

It accused Commonwealth Ministerial Action Group (CMAG) of unfairly singling out Maldives for unfair treatment, despite the situation in Maldives being judged to be considerably better by other international organizations compared to some other Commonwealth member countries.

Maldivian government said that though Commonwealth professed to advocate for democratic values, it had consistently attempted to influence domestic affairs of the country, and demanded the government interfere in its justice system.

The government said it would continue strengthening ties with other international organizations and foreign countries which respect the independence and sovereignty of Maldives.

Abdul Raheem: Back away, Yameen will be elected President in 2018