Purpose of attempting to remove Shah from his post is to manipulate Primary votes: Dr Didi 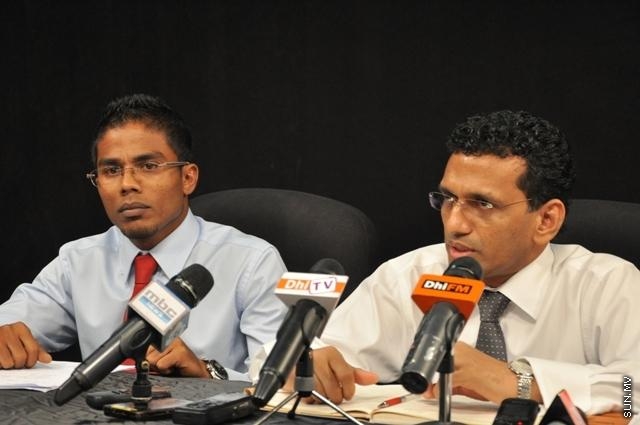 Ousted President of Maldivian Democratic Party (MDP) Dr Ibrahim Didi has said that the purpose of taking a no-confidence vote on MDP Secretary General Hassan Shah to remove him from his post, is to influence and manipulate the vote of the upcoming MDP Presidential Primary Election.

Speaking at a press conference held at DhiTV studio by Dr Ibrahim Didi, removed Vice President of MDP Alhan Fahmy, and Secretary General Hassan Shah, they said that the work to remove persons who do not support former President Nasheed from MDP leadership is planned by MPD’s ‘spiritual leader’ Nasheed, and that this is done in an extremely autocratic manner.

Dr Didi said that the decision made at the meeting attended by Nasheed yesterday, where it was passed that the party Secretary General had no confidence, was in violation of the regulations pertaining to employment and also conducted purely to achieve a political purpose.

He also said that he is working on compiling the documents necessary to file the case to court, of him and VP Alhan Fahmy being removed from MDP leadership against the party’s basic regulation. He noted that MDP secretariat does not cooperate in this matter, but the documents will be collected and filed soon.

Alhan Fahmy said at today’s meeting that MDP has a policy to remove whoever that speaks against Nasheed’s policies, and that MDP’s administrative system and structure are formulated as per Nasheed’s wishes, and that he has hijacked the entire party.

He said that it has been a while since they had been attempting to remove Shah from MDP without giving any practical reason, and that this idea was initiated by Nasheed soon after the election.

“Soon after Didi and I were elected to the party’s leadership, Nasheed, Reeko Moosa, and Mariya Ahmed Didi started work to remove Shah from the party,” Alhan said.

Shah said that issues pertaining to him got serious when he assisted Dr Didi in monitoring the election, to ensure that there was no manipulation of the votes.

He said that problems also began to surface when Reeko Moosa was appointed Interim Chairperson, and that he knew that problems related to him were being relayed to Nasheed. He said that despite having been asked to resign by several senior members of the party, he has not done so until now because he wanted to serve the party.

Shah said that he had been told that the party does not have the money to pay his salary, but that he will remain in the post even without a salary, until he is removed.

Mariya expresses interest to contest for post of MDP President