We are not trying to take over Usfasgandu: Police 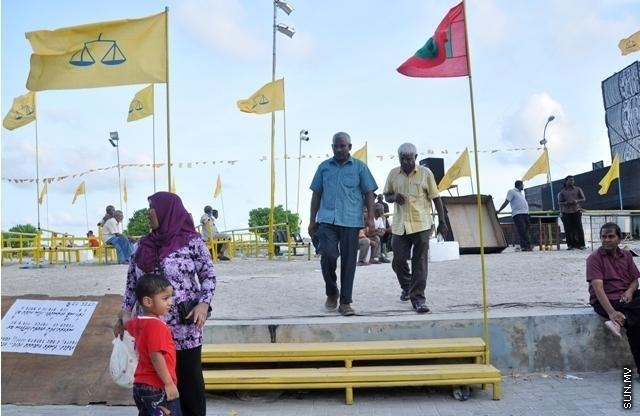 Police have said today that they have not attempted to take over Usfasgandu, and area used by Maldivian Democratic Party (MDP) for protests.

A message has been going around since this evening via SMS and social networks, that a Police force is preparing to take over Usfasgandu sometime today.

Police Media Coordinator Hassan Haneef told Sun Online that the Police have no such plans, and expressed dismay that such lies are spread about the Police.

“Maldives Police Service believes that such SMS’s can create fear in the society; there is no truth in the stories being spread that the Police are planning to take over Usfasgandu. Police are not making any preparation in this regard,” Haneef said.

When asked if any government institution has made such a request from the Police, he said that he was ‘not aware of that’.

MDP moved their protest activities to Usfasgandu following the Police and Armed Forces dismantling MDP camps at Raalhugan’du area, and prohibited holding protests there. This case is currently ongoing in court.

It was decided at a recent cabinet meeting that Male’ City Council had leased Usfasgandu to MDP against the agreement with the government, and to notify City Council to hand over the area to Housing Ministry.

City Council has not responded to the notice sent to hand over Usfasgandu to Housing Ministry before Monday.