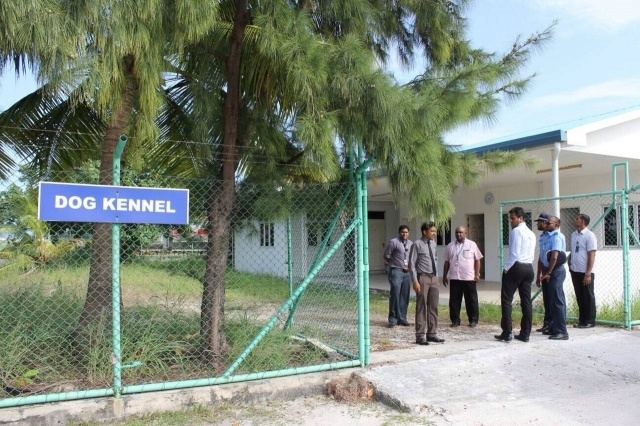 Minister of Home Affairs Umar Naseer has visited the kennels being set up at the airport to house sniffer dogs, as part of the efforts to prevent drugs being brought into the country.

During the visit, Umar Naseer requested senior officials of Maldives Airports Company Limited (MACL) to ensure that the kennels are of good quality, and completed on time.

Media Coordinator of Ministry of Home Affairs Thamzeel Abdul Samad told Sun Online that the project would be completed before 16 February 2015, when the ‘Faaragema’ dog squad consisting of 16 dogs, is expected to arrive in the Maldives.

Two inspectors from the Netherlands, from where the dogs were acquired by the Maldivian government, will also arrive with the dog squad, said Thamzeel.

Thamzeel further said that a six-week training program would be conducted for Maldivian police officers, and two police vehicles would be dedicated for the dog squad.

The government paid €40,000 in November 2014, to establish the 16-member dog squad to fight drugs in the Maldives.