We will lower interest rate for tourism development loans: Yameen 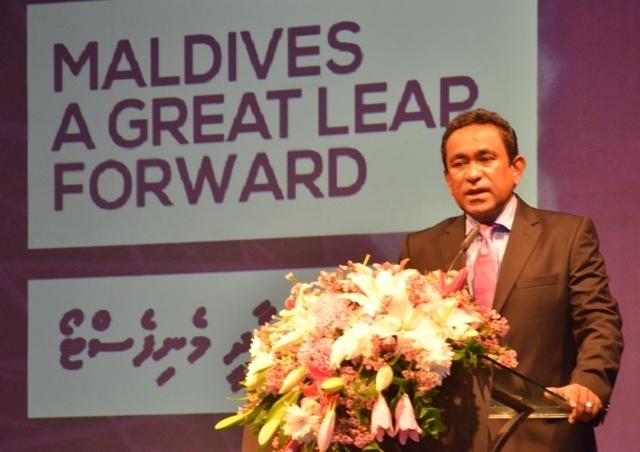 Presidential candidate of the Progressive Party of Maldives (PPM) Abdullah Yameen has said that if elected, they will lower the interest rate on loans taken for the development of local tourism and fisheries industries.

Yameen said this while speaking at a special function held at Dharubaaruge last night to launch the party’s manifesto.

He said that people use their saved money to finance loans given by banks, and that the person makes a profit of only three or four percent on his saved money, which is the cost of lending for the bank.

“People save money, and to keep it safe and earn something, they deposit it in the bank. By depositing it in the bank, if they are lucky, after one year they make a profit of about three or four percent,” he said.

He said that meanwhile, the cost of borrowing or the interest rate on loans given by banks to businesses is between 10 to 12 percent.

Yameen said that this huge difference between the cost of lending and the cost of borrowing, is not acceptable.

“I find this hard to accept. I don’t think that there should be a difference of 8 percent. God willing, we will establish macroeconomic stability, and work towards reducing the difference between the cost of lending and the cost of borrowing.”

He went on to say that in other countries, the difference between the cost of lending and the cost of borrowing is just 1 percent, while in the Maldives it is as high as 8 percent.

He said that the interest rate of loans given for tourism development should not be high, and assured that a PPM government would take action to change this.

Adheeb said that serious changes have to be made at macro level in order to get the economy back on track.

The manifesto includes establishing several regions in the country as ‘economic regions’, and working towards the development of those regions.