The economy is not as it should be, and not as it was before either: Gayoom 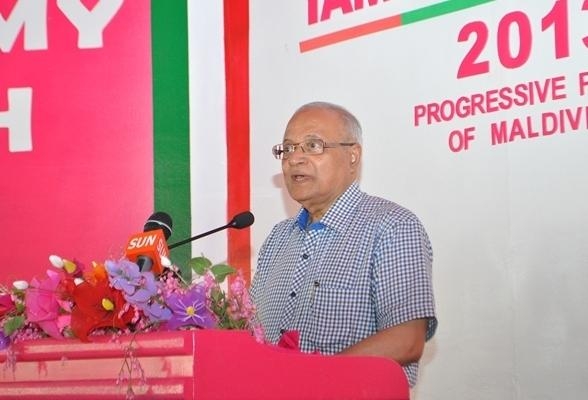 President of the Progressive Party of Maldives (PPM), former president Maumoon Abdul Gayoom has said that the economy of the Maldives is neither as it should be, nor as it was before.

Addressing the people of Dhaalu Kudahuvadhoo, he said that the Maldivian economy has been destroyed.

“As you would be aware of, we are experiencing serious economic problems. Our economy is seriously damaged and destroyed. This is not the way it should be, and this is not how it was before either,” he said.

He said that PPM presidential candidate Abdullah Yameen is the person most capable of saving the country from its current economic situation, and that this is the reason why he should be elected as president.

He said that Yameen has proven this to the people when he held high economic posts in the government.

The rally held in Kudahuvadhoo harbour area today was attended by PPM presidential candidate Abdullah Yameen, Leader of Maldives Development Alliance (MDA) Ahmed Siyam Mohamed, senior officials of PPM and MDA, and supporters of PPM from Kudahuvadhoo and other islands in Dhaalu Atoll.

No point in development if the people cannot relax: Yameen