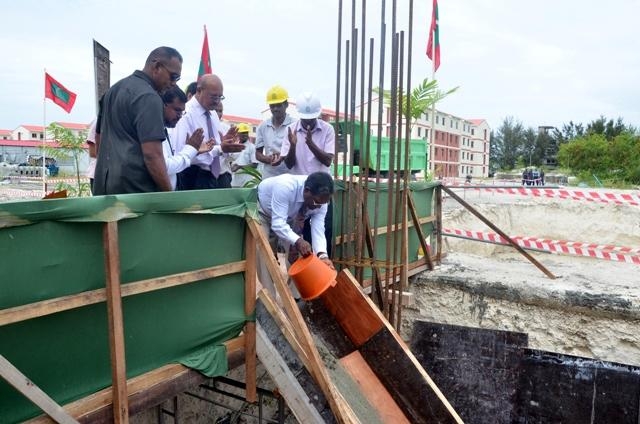 President Dr Mohamed Waheed has laid the foundation stone for a new preschool and a school under construction by the Housing Development Corporation (HDC) in Hulhumale’.

Speaking at the ceremony, President Waheed said that in a society, basic services such as education and health are just as important as housing.

He said that major changes need to be made to the education provided in the Maldives, in order to ensure that students have the new areas of education and discipline they require when they leave school.

“We need major changes, to ensure that students are given the new areas of education and discipline that they need when they leave school. In this regard, in addition to general education, we have to think about employment opportunities for school leavers. Instead of being a school where students can take the A’level Exam, we need to ensure that students who complete grade 12 have the necessary education and talent to enter the job market,” he said.

He said that the two-storey building will have six classrooms, and can facilitate up to 500 students.

Shahid said that the second school, where classes will be conducted for grades 1 through 12, has been handed over by HDC to Ameen Construction for MVR 100 million.

Shahid said that the five-storey building will have 44 classrooms and can facilitate up to 1,500 students, and that its construction is estimated to be completed in December 2014, but efforts are ongoing to use the building to some extent at the beginning of the school year in 2014.

The economy is not as it should be, and not as it was before either: Gayoom