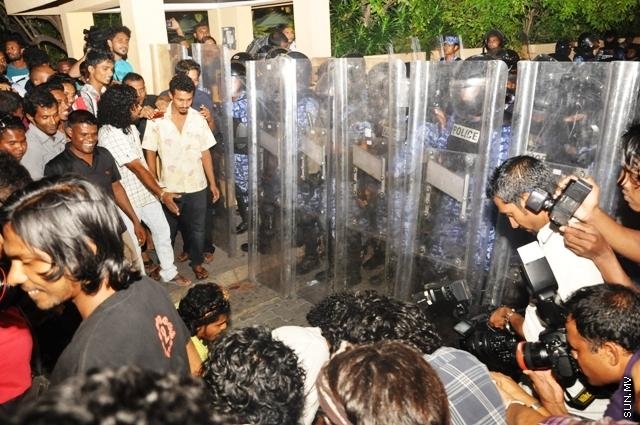 A crowd of people from the Maldivian Democratic Party (MDP) staged a protest tonight in front of the People’s Majlis House, to demand immediate release of party Member of Parliament Mohamed Rasheed from police custody.

Rasheed, MP for Hithadhoo Dhekunu Constituency, was arrested by the police for investigations on the large scale vandalism and arson perpetrated by MDP activists in Addu City on the 8th of this month.

MDP activists burnt down all court houses in Addu City except one, and all the police stations in the city, after former President Nasheed, from MDP, resigned from office on Tuesday after the people, joined by the Maldives Police Service and Maldives National Defence Force, protested against his unconstitutional and unlawful actions.

According to reports, Rasheed was one of the planners of the vandalizing mob mobilized by MDP on Wednesday.

MDP’s protest tonight began at about 8:15 pm. The protests went on for about an hour, before the police pushed them back for a few hundred yards. However, they later gathered in front of the Majlis House again.

A number of parliamentarians from MDP were seen inside the Majlis House, instructing their activists outside on how to carry out the protest actions. The protest ranks were dispersed by the police around 12:00 pm.

After the protests, Haamid Abdul Ghafoor and Mohamed Rasheed, two MPs from MDP were seen speaking to the foreign media, telling them that a large number of MPs from the party were being arrested and tortured by the police, and that they were protesting against those actions.

However, the Maldives Police Service has repeatedly condemned the “lies being deliberately spread with regards to MDP activists arrested following the vandalism and arson they had committed in Addu City”. The Police said that the individuals in question were all arrested for investigation of the matter.

Commissioner of Police Abdullah Riyza has also invited the Police Integrity Commission and the Human Rights Commission to visit police custody facilities and observe the conditions in which detained individuals were, and how they were being treated by the Police.

A police officer who passed by MDP Office attacked and injured