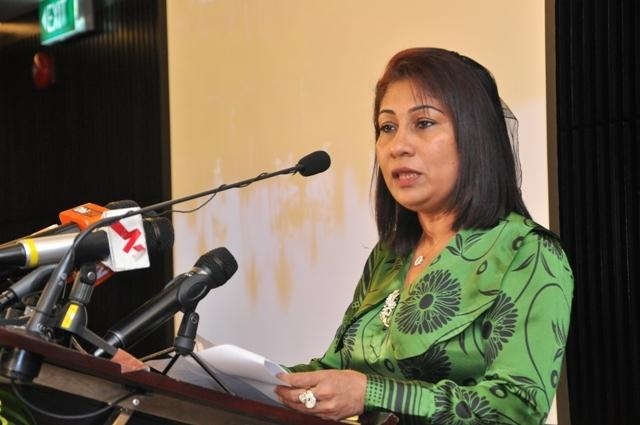 Ministry of Environment has launched a new initiative today to develop eco-tourism, conservation of wetlands and drainage enhancement in Addu City and Gnaviyani Fuvahmulah.

Funded by the Climate Change Trust Fund (CCTF) implemented by the World Bank and Government of Maldives with the grant aid from European Union (EU) and the Government of Australia, the project aims to conserve the protected wetlands in Addu City and Fuahmulah and to obtain economic benefits from these areas through sustainable conservation efforts.

Speaking at the inauguration ceremony at Traders Hotel today, Minister of Environment and Energy Dr. Mariyam Shakeela announced that Hidra, a Spanish company has been commissioned for MVR 7 million for the project.

“This project being launched today under the CCTF project, aimed at the protected wetlands in Addu City Hithadhoo and Gnaviyani Fuvahmulah, is a very important project for Fuvahmulah and Addu City. This project will be carried out by a Spanish company named Hidra for MVR 7.7 million,” the Environment Minister said.

Dr. Shakeela said that the Project is divided into 2 phases.

“The first phase involves the development of a conservation plan, designing methods of eco-tourism and Hidra will work on improving the water drainage system in these islands as well. The second, implementation phase includes the establishment of eco-tourism facilities and the implementation of the rehabilitation of the water drainage system will also be carried out,” the Minister said.

She also said that this is the first such project in the Maldives with a conservation plan to develop eco-tourism in an inhabited island, and that the Ministry of Environment and Energy is aiming to implement similar such projects in other islands around the country. She also said that developing a firm and systematic plan to manage and gain economic benefits from these wetland land areas could play a vital role in changing the interpretation of the people regarding them.

The ceremony was inaugurated by Vice President Mohamed Waheed Deen. The Vice President praised the work of Environment Ministry and said that it stands as an example to all other government ministries.

Vice President Deen noted that once deteriorated, the environment is not something that can be reinstated into its original form and that if properly implemented, the conservation of the environment has great benefits for the development of the economy.

Will announce a running mate on Thursday night: PPM