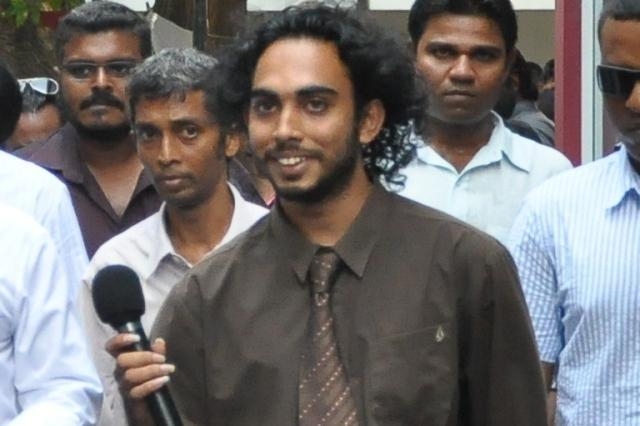 Raajje TV Journalist Ibrahim Waheed (Aswaad) has returned to Male’ following treatment in Sri Lanka, after he was injured in an attack in February.

Aswaad was given a warm welcome as he arrived at around 2:30 pm, by well-wishers and leaders and supporters of MDP.

Speaking to Raajje TV from the airport, Aswaad said that he was very happy to return to the Maldives, and that the attack on him was an attack on media. He said that he will remain undeterred in his role as a journalist.

Aswaad was attacked while traveling on a motorcycle near Artificial Beach. The attack left him with serious injuries on his face, which also affected his eyesight. Raajje TV has said that even though he came back to Male’ today, he had not yet fully recovered.

The police have sent cases against the suspects who attacked Aswaad to the Prosecutor General’s Office. The suspects are Ahmed Wishan of M. Kerin Light Uthurubai, age 22, and Hassan Raihan of G. Fehimaage, age 19.

Chief Inspector of Police Mohamed Dhaaoodh, from the Serious and Organised Crime Unit of Maldives Police Service, has said that according to investigations, the attack on Aswaad was premeditated but it was not an attack on media.