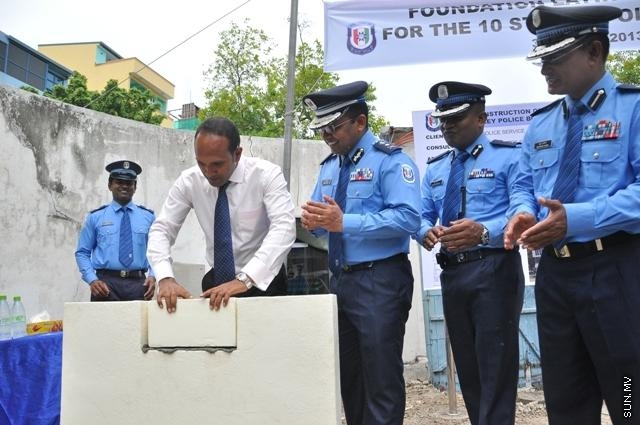 Foundation for a new building has been laid down today at a function held as part of the celebrations to mark the 80th anniversary of the Maldives Police Service. Once completed, the 10 story building will be used by the police for administrative purposes.

The foundation was laid by Home Minister Dr. Mohamed Jameel Ahmed today at a ceremony held on the compound of the H. Four Winds, the designated plot for the building. Speaking at the function, Commissioner of Police Abdulla Riyaz said that the new building will mainly serve to conduct police investigations.

He also revealed that the building will house a new police station, and said that he hopes that the project will be handed over to a construction company within the next two weeks.

Home Minister Dr. Mohamed Jameel said that the primary purpose of the new police building is to create more avenues to serve public and that the government is constantly trying to find ways to create a suitable working environment for the police.

Dr. Jameel said that the police will be able to start utilizing the building in about one year and six month’s time, and that this will ease the space constraints currently faced by the organization.