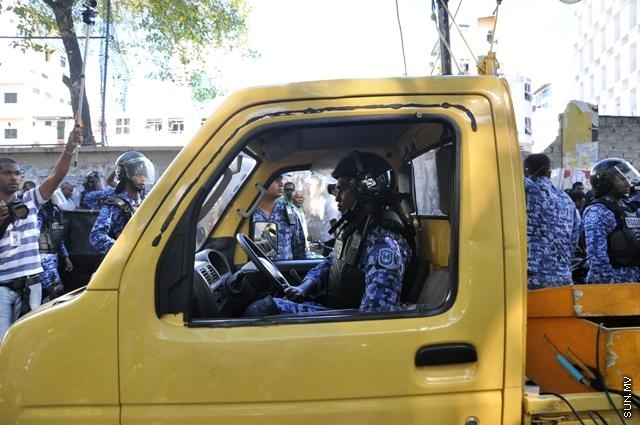 The police have seized a pickup used by Maldivian Democratic Party (MDP) at the protest near Majeediyya School today.

The pickup was equipped with a loudspeaker, and protesters used it to play loud music thus disturbing the students of the school.

The pickup was seized after protesters ignored police orders to leave the area following complaints that students of the school were being disturbed by the loud noise.

Police repeatedly warned protesters to leave the area near former Naadhee building, and pushed the crowd up to Roashanee Building. Clashes between the police and protesters resulted in the arrest of some protesters.

MDP also gathered near the office of the Prosecutor General (PG) today, and called for the resignation of PG Ahmed Muizzu.

MDP has been protesting on the streets of Male’ claiming that the trial against former President Mohamed Nasheed is politically motivated.

Action must be taken if illegal activities are conducted in an embassy: Samad