Institutions calling for Christianity are working in our society: Minister 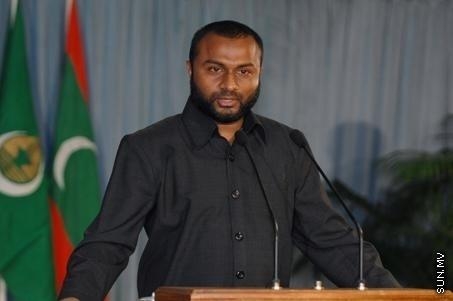 Islamic Minister Sheikh Mohamed Shaheem Ali Saeed has said that a strong ideological battle is taking place in the Maldives to weaken and remove Islam from the country, and that institutions calling for Christianity are hard at work in the society.

Speaking at the official ceremony held today in the Islamic Centre to mark Maldives's adherence to Islam, Shaheem said that foreign parties are secretly working to erase the Islamic principles stated in the Maldivian constitution, and that the Ministry has been receiving reports of a missionary movement secretively being conducted in the Maldives.

“A strong ideological battle is being fought to weaken or eradicate Islam from the Maldives. Institutions calling for Christianity are working towards this in our society. From outside the country, and from the inside, secret attempts are being made to create doubts in the hearts of our young people. Islamic Ministry is receiving reports that a missionary movement is currently active in the Maldives,” Shaheem said.

He said that work to distance Maldivians from Islam and to eradicate Islam from the Maldives can only be stopped if the Maldivian people work together, and that the political advancement has left the society with a need to repair their ranks.

Shaheem also said that a lot of work needs to be done to strengthen the Islamic beliefs through our national process. He said we must work towards expressing out religious sentiments, and that there is a need for sincerity in society in executing the justice according to Islamic sharia. He added that most of young people in the society are confused about the beliefs of Islam and that the society has to be careful to teaching them Islamic beliefs.

Work on IGMH new building order to be discontinued